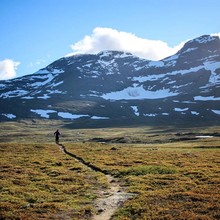 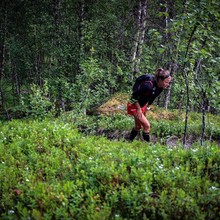 Yesterday finishing Kungsleden trail I could hardly believe I had done it! When I started to plan kungsleden I looked at distance, and the hut system and after that I planned day by day after what I thought would be possible to run, but a big big challenge. And to actually do it, to fullfill a dream, a goal was amazing. I had some really tough moments out there, but that is part of the challenge. To challenge and overcome and to see the beauty in it. 4 days and 21 hours ended the 450 km trail challenge in Hemavan.

“FKT for me is not only about records, it’s about challenging myself in an environment I love. I find that I can often push myself more on a challenge, a summit I run up to, because I know that this is what I really want. And to do it in a light alpine environment I feel that my capacity is really strong. This kind of efforts are very rare in the women’s world so I would also like to inspire other girls to push their limits”, Emelie said.

Here's a couple articles on the trip:

And her trip report, published in September:  https://www.womensrunning.com/2018/09/inspiration/emelie-forsberg-on-chasing-the-kungsleden-trail-fkt-in-sweden_99187

It was just after midnight when my alarm went off. I jumped up and almost unconsciously turned the water on to boil. Then I realized that now it begins—my project, my long run that I have been wanting to do for many years: the King’s Trail, a 450-kilometer trail through the northern part of the Swedish mountains.

I first started to plan this run 10 years ago. At that time, I was a baker at a mountain hut, and I loved the outdoors. I had built my life around running, skiing and climbing. I had brought my studies and my work to the mountains so I could spend all my spare time doing what I loved most.

It was almost by accident that I became a mountain runner and a ski mountaineer for a living. It was never my dream to become a professional athlete, but I realized I loved it, and for almost seven years I spent both summer and winter competing in running and ski mountaineering events. I knew that I was lucky to be able to turn my passion into work. But this summer, I felt the urge to go back to what actually brought me into the running world: the curiosity about what the body can do, where it can take you and where the trail brings you. What’s behind that mountain or on that next summit?

So I decided to take a break from my racing schedule to run the King’s Trail. Once I began planning, I found the notes I had first made 10 years ago. Back then, I calculated about 10 days to complete the trail. This time, I calculated less than five. That meant around 80–120K each day. It was challenging, but possible. After devising my plan, I saw that the current trail record was six days and three hours, set by the Norwegian ultra-runner Sondre Amdahl. It was a little scary to realize I had planned to beat that by almost two days.

At 1 a.m., I started to run, the midnight sun waking me up with every step. It was magical to run through the night. I passed a few mountain huts, in which all were asleep. Traversing the King’s Trail doesn’t just require running; there are a few lakes that you need to cross, either by rowing or catching a small boat that only crosses at certain times. For my first boat crossing, I had planned to be there after 11 hours. With 91K of running in my legs, I made it. After that, I had 16K to get to the second crossing. That brought me to a bigger mountain station, where I could buy a nice dinner and sleep comfortably. Before falling asleep, I wondered how I would feel the next day. I had run the second-longest distance I had ever completed, and I would repeat it for four more days. I couldn’t wait to find out.

Day two surprised me. I felt better than I could have imagined. That day required “only” 10 hours of running, and compared to the first day’s 15 hours, it felt like a recovery day. The third day surprised me even more. I had a boat to reach, so I was running many kilometers in the 5–5:30 pace. But I still missed the boat. It was a very low moment when I realized that the next boat wouldn’t deliver me to the hut I planned to run to until midnight.

The fourth day was hard mentally. From step one, I was tired, and I wondered how I would make it through that day’s distance. What made the task even harder was that I realized 70K in that I didn’t have only 11K to go—the trail had changed, so I had 28K and a mountain to climb before I was finished. I was tired and low on energy, but what could I do? I just put one foot in front of the other, and many hours later, I was in bed, setting my alarm for the last day. I saw the finish line. I knew I would make it. I didn’t want to think too much about it; I had learned that I needed to be in the moment to make it through this run.

The last day is always the hardest, and when I had 10K to go, I wanted everything to pass. I had done this. My body and my mind had worked so well together. I had seen so many beautiful places, so much wilderness. I was in awe of everything. Reaching the finish line was more than amazing. I could hardly believe it—450K through the mountains.

The human body is quite fantastic if we take care of it, if we step up training and endurance in a healthy way. I believe every one of us is made for running—we just need to find our own way. Embrace your capacity.

Swedish mountain runner Emelie Forsberg set the fastest known time for the Kungsleden Trail in the Swedish Lapland, completing it in four days and 21 hours, finishing on July 7. Her book, Sky Runner, was released earlier this year.