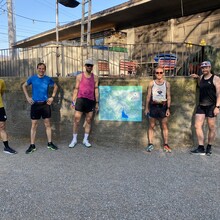 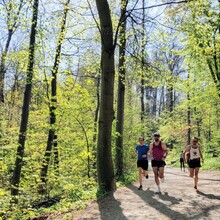 It was a rather spontaneous idea that came from the urge of running a spring marathon in times where there aren't any races happening. So I (Emil) suggested to a group of running-buddies to attack the Green-Marathon-FKT. 5 guys signed up to the challenge – and off we went on the same sunday morning that would have seen the Zürich Marathon go through.

Our plan was to do a grouprun of 30km and afterwards race the remaining 12km to the finish (all downhill and flat) – may the best man win. But on route we realised that our forces were very evenly split. Therefore we decided to push together until the end. Tian and David had to drop out along the way – but joined us later for the finisherbeer. Nico, Tom and I finished it off and set a new FKT which we hope will challenge some other runners to give this beautiful loop a try.

Even though there are many fountains along the way, we prefered for the sake of speed to rely on aidstations. Reto supplied us with water after about 10km, David had setup an other bottle-station after 22km. And there was a suprising third feed from Carsten, the first holder of this FKT after about 35km.