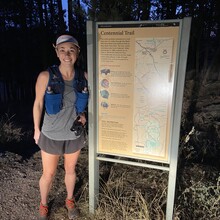 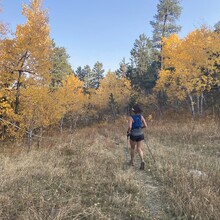 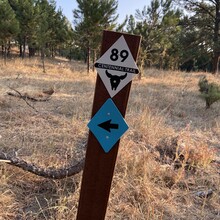 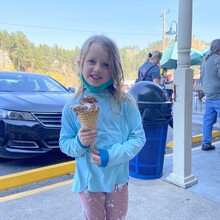 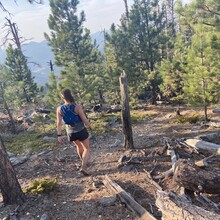 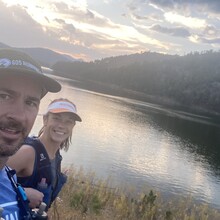 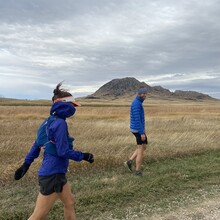 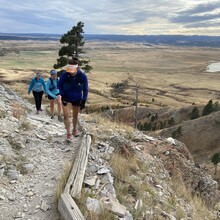 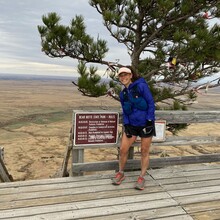 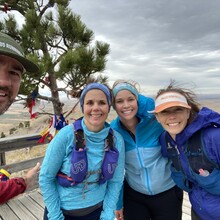 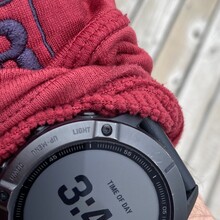 Prior to my FKT attempt, my longest run was the 100k distance.  But, the time was right to put a year’s worth of talking to the test and attempt my own supported FKT of the Centennial Trail.  I’m not as hardcore as my husband, who set the unsupported FKT of the Centennial Trail in late September, but I knew October was the right time: going supported meant no need for water access from the creeks, temps this time of year would be manageable, and no poison ivy!  Two of those considerations bore out.  I had a crew of five (husband Ryan, friends John, Shawna, Charlotte Haak, and Glenda) who provided me with food, water, cheers, and company on the trail.  Poison ivy, wildlife, and people on the trail were non-existent….so were the mild October temps.  Mid 90s for Day 1 and little relief overnight.  Day 2 was better until the 40mph winds kicked in. The Black Hills are known for unpredictable and cruel weather; I should have known better than thinking I could plan for ideal conditions.

On October 10th at 6:33am, I started at the southern terminus of the #89, Norbeck Trailhead in Wind Cave National Park.  There was no need to start earlier, as the completely made up time goal of 30 hours meant only one night of darkness. Ryan (husband) and George (dog child) saw me off queuing up Ryan’s SPOT, followed immediately by a bison encounter 35ft. from the trailhead.  This bison was one of four very active bulls I saw in the first 15 minutes of my trek, meaning there was quite a bit of swinging wide off the trail and waiting patiently (scared) for them to mosey along.  These were the only four bison I encountered during the run.  Waiting on the bison to mosey was also the only time I was the slightest bit cold for two days.

I ran the first thirty miles solo and tried my best to keep the pace in check.  Decided to not feign stability/ability/grace and willingly got my feet wet crossing French Creek (this time of year it’s the only real creek crossing until Bear Butte Creek in Sturgis).  Pretty solid climb out of French Creek, lots of rocks.  I met Ryan, George, and the Haaks at Iron Creek.  John and Shawna Haak, along with their 5 yr. old daughter Charlotte, thru-hiked the entire Centennial Trail this summer (yup, the most badass family I know). I’ve run most of the #89 Trail, but had never been on the sections from French Creek to Big Pine, and Deer Creek to Dalton Lake.  Between Ryan and the Haaks, I had as much knowledge and experience as someone who’d run the entire trail, a huge comfort and advantage.  John jumped in with me at Iron Creek, running/hiking the ups and downs of the section to Big Pine Trailhead.  I charged my watch and tried to eat while running solo from Big Pine to Samelius, but the heat was definitely wearing on me and my stomach.  Ryan joined me for one of my favorite sections, Samelius to Dakota Point.  The section in the Black Elk Wilderness has a pretty good climb up Samelius Peak that rewards you with gorgeous views of the Black Elk Wilderness.  We made it over the dam at Sheridan Lake and just past the Dakota Point Trailhead by sundown.

50ish miles in 12 hours, with only…75 to go?!?!?  Um, no way. No. First time the task felt daunting. It didn’t help that by this point my stomach was in full on revolt.  Thank goodness for John Haak and GPX files in the section Dakota Point to Brush Creek…it’s an easy part of the trail, terrain-wise, but rough navigating.  John got us through this section, but got us comically lost in the very thick brush 1/3 of a mile from the Rapid Creek Trailhead. Glenda joined me for one of the lowest legs of my run…Rapid Creek to Deer Creek, where my stomach (and mood) stopped cooperating.  I was pretty much in a queasy funk from Rapid Creek to Elk, where the sunrise and a more cooperative stomach finally meant moving at a more respectable pace. But before I got to enjoy that wonderful, gorgeous, and fun downhill stretch, I had to tackle the section between Dalton Lake and Elk Creek that I had been whining about since pretty much the beginning of the run. I dreaded the long climbs out of Dalton and around Crooked Tree that I remembered hating from our Black Hills 50 fatass in late June (also a hot weekend). Ryan was the perfect person to have with me for this section, as we chatted away and just kept moving forward…. before I knew it, all the long climbs were over.  Unfortunately, while I was mentally rebounding, the only physical problem of my entire run was manifesting: the balls of my feet were in shambles.  I’ve dealt with a lot of (other people’s) blisters in my time, but never suffered from them myself.  Ya, no thanks, never need to do that again.  We troubleshooted blister treatments and I ate food again (finally hungry!) at Elk Creek.  Temps were finally dropping and I was on the part of the trail I had run countless times before.  I was also at 100 miles.  Just a mere marathon to go…eek!

Six hours earlier I was trying to decide the most elegant and respectable time to abandon the effort…but as sun rose and we closed out my dreaded Dalton Lake to Elk Creek stretch, I knew it wasn’t whether I could finish, but how much time could I get back after slow rolling the night.  My original, completely uninformed, goal was 30 hours.  After walking almost all of the night (I maybe ran a combined 4 miles from sundown to sunup), that time was clearly out of reach.  At Elk Creek I wondered whether a sub-40 hour finish was possible...by the time John and I started descending into Bulldog, I realized biding my time (however frustratingly slow the pace was) meant I could actually move more productively at mile 100 than mile 60 (thanks for the sage advice Ryan Wanless and Bryan Whitesel).  Friends Chris and Jeremy ran us into Alkali, where I traded John in for some girl time (so glad these sage women were with me when my watch stopped recording).  But not before devouring Ryan’s completely successful crewing audible of Burger King chicken fries. 15 miles to go and the wind picked up.  The Bear always knows when you’d love for it to not be windy…and then be windy. Glenda drew short straw and ran with me across the exposed prairie to Bear Butte Lake.  Thankfully, the 40mph winds were cross/tailwind.  Ryan, Glenny, and Shawna were very kind to hide their chuckles as I slowly climbed (crawled?) to the summit of Bear Butte.  A superstitious person always, I waited to take that final step onto the finishing platform for a few minutes, wanting to end my trek at 33 hours, 13 minutes, and 13 seconds.

The run was everything I thought it would be: beautiful, challenging, enlightening.  Sub-30 hours is certainly doable, but it will likely take knowledge of the trail, some good climbing legs, friends/family willing and able to support during long stretches, and a bit of cooperation from Mother Nature.  I was lucky to have spent the last year running on the Centennial. I was lucky to have the help that I did, as they contributed invaluable support (knowledge, experience, and company).  I was lucky Mother Nature didn’t make things any worse. All around, I was lucky and feel lucky to have had this experience running the entire 124-mile Centennial Trail.