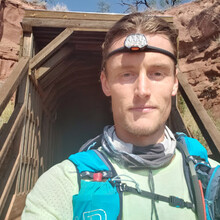 Notes:
• Stopped in Turkey for 1 hr to charge gear.
• Hiked through the night from Turkey to Parnell Station. Took a two hour nap at Parnell until the sun started to rise.
• Hogs, Racoons, Deer, Skunks, Bats, Coyotes, were present amongst others. Evening run ins with packs of Hog proved to be a constant battle.
• Drop bags were set at Parnell Station, Tampico Siding, Turkey, and Quitaque on the way in.
• Headlamp ran out of battery. Navigated by West Texas Blood Moon for the last 4 hours.

*There are no public taps or access points for the first 22 miles.

*Received no outside help for the entire distance.

Trail was beautiful, overgrown in spots. I ran some. Hiked most due to terrain.