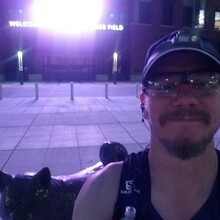 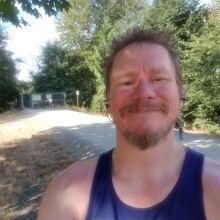 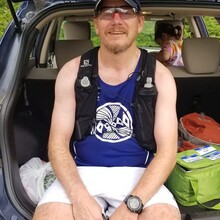 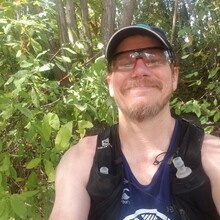 The heat was quite oppressive the weeks leading up to this run so I started as early as possible 0600.  The streets were dark and empty with cool weather which was nice.  I staged coolers out as aid stations the night before at miles 25 near the VMAC, 35 near Arrowhead elementary and mile 45 at Mathews beach park.  The course has some downhill sections coming out of the Abroretum and into Leschi, then it is flat and lonely around the Renton Airport, mostly on sidewalks.  There are a number of parks with restrooms that are open to refill water.  The first stop at VMAC was all fine and this is where the trail will start to have a few folks mostly runners and not many bikes.  At mile 21 the path head inland into the streets of Bellevue and the temperature climbed into the mid 80s.  The route is on sidewalks until it reconnects with the Burke Gilman trail at mile 38.  At mile 24 there is water at the Bellefileds Trailhead with the next water at mile 29 Houghton Beach Park.  The sidewalks alternate sides of the road a bit and there are some waits at half a dozen stop lights.  Once out of downtown Bellevue the route climbs slightly and then down into South Kirkland.  The route through Kirkland follows the water and is pretty busy with beach goers and prams on the sidewalk so care must be taken to dodge bikes, prams and cars, however this is all can be ran on a sidewalk without crossing but a single intersection.  Water is available again at marina park.  The route has a gradual uphill for a mile then back down towards the lake.  Water is available at Juanita Bay Park and Juanita Beach.  From Juanita Beach the route follows Juanita drive and has a gradual uphill climb of 420ft from miles 33-36 and this proved to be tiresome and draining in the heat.  After this slight hill the balance of the route is downhill or flat.  The route connects with the Burke Gilman trail at mile 38 and follows the trail adjacent to the Lake past many parks where water is available.  The final stretch runs through the University Village with a few road crossings.  Once you hear the water towers at the University of Washington you have less than 0.25 miles to go where you cross the final walking bridge back to the stadium where you started to complete the loop.  In general I was fine until I hit the hills coming out of Kirkland, Juanita and my pace slowed.  After mile 42 I was basically running on fumes and felt pretty terrible but pushed ahead.  I had a short pre-staged aid break at Mathews Beach Park.  The final 3/4 I was pushing hard with no stops to try to come in under 10hrs, which I accomplished by 33 seconds.   This was my first self-supported effort, first ultra in the heat and resulted in almost an hour at my three pre-staged aid stations re-applying sunscreen and eating carbs.    Nobody paced me and I was alone running, nobody provided any support.  The wife and kids met me at mile 36 to cheer me on and again at the finish for high fives.  This route is all on pavement so it can take a toll on the legs but it is mostly flat and fast. With the plethora of parks along the route for water this could easily be completed unsupported.

That's so funny that we ran this on the same day, starting at the same time. We must have crossed paths since we were running opposite directions. We got lucky with the weather that it was a relatively cool day. Nicely done!

Totally cool that we both decided to run an ultra to raise funds for non-profit on the same day.  I am sure we passed each other.  I ran the loop in sections the previous three weekends to scout staging areas for self supported and the heat was really a problem.

Well done on your route and your time.

Perhaps we can come up with some other FKT routes in the area.