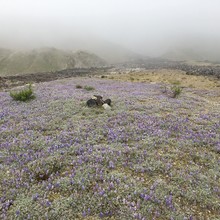 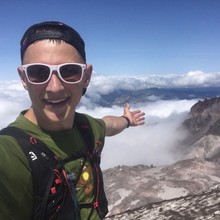 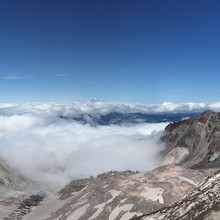 The way up Monitor ridge the first time was cold, wet, and blowing sideways. It continued to rain the first ~20-23 miles on the Loowit until I reached the Toutle river, and cleared up in time for the second summit.

Circum-double-ascension of Mt. Saint Helens. 1st place in 11h 23 minutes. Ran into some nasty wind/rain on the first ascent and the got rained on for 20 miles of the Loowit with very little visibility. Rain and clouds broke about 4 miles from starting my second ascent. Hard to believe I got the KOM for the Helens descent seeing as my legs were shot and my feet were so tender from being wet for 9 hours. I guess that just fits with everything else I do though, crushing the long downhills.

Chronological summary of the run:  Starting at 5am, July 27th 2019, I embarked on the unsupported up-down-around up-down of Mt. Saint Helens via Climbers Bivouac. The first 3 miles or so were pleasantly cool, but soon after I hit monitor ridge the wind started picking up. Visibility decreased and the heavy mist in the air blew sideways at a gale force. In only shorts, a t-shirt, arm and leg sleeves I pushed to the summit without stopping for a step. Once I hit the rim I broke left down and up to the true summit. No views at the summit made me turn around and start descending without hesitation to simply get out of the snotty weather. Once I hit the Loowit I turned left to start my counterclockwise circumnavigation. Shortly after I started my loop, I stopped briefly to conduct some foot maintenance. I stopped a second time to do the same thing about 10 miles later shortly after Windy Pass. It misted/rained on and off (more on than off) for ~20 miles of the Loowit, at times blowing stiffly. Interestingly, one of the calmest points during this 20 miles was at the top of Windy Pass. As I crossed the Toutle River the rain began to lighten up and blue sky began to show. I filled up all of my water bottles and bladder here for the rest of the Loowit and the second ascent. Feeling energized by the weather improving, I make quick work of the last boulder field and cruised the last bit of the Loowit. The second summit had gorgeous weather. Although I moved more slowly, I only stopped briefly to show a ranger my climbing permit. At the true summit the second time I stopped for ~60 seconds to snap a few picture and start descending. The short bit on the rim on my way down was slow, but I quickened pace as soon as I broke from the rim. Not much to say about the way down, simply navigating the boulders until the trail becomes runnable at the tree line, at which point I started pushing pace to the bottom. I stopped my watch shortly after hitting the parking lot. 11:22:40. That is all.

Post run Facebook post:  What a day on Mt. Saint Helens! I completed an unsupported circum-double-ascension in 11:22:40. By the numbers it was ~43 miles with just over 15,000 feet of vert, but numbers cannot tell (or at least I don’t have them) how windy, cold, and rainy the first ascent was pre-sunrise, the boulder fields that cover most of the course, or all the ash that got into my already wet shoe and did a number on my feet. It continued to rain and blow for the following ~20 miles on the Loowit trail and I was soaked through. Rough splits were 1:50 to the first summit, :50 for the descent to the Loowit, 6:00 to go around the Loowit, then 1:37 to summit a second time starting from the Loowit, and finally a hot descent back to Climbers Bivouac in 1:05. All in all it was a successful day and I really surprised myself with how long I was able to sustain such a high effort! Cannot wait to see how these training results translates into a race sometime!