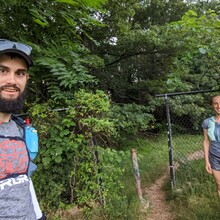 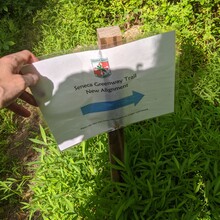 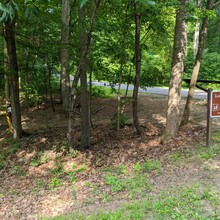 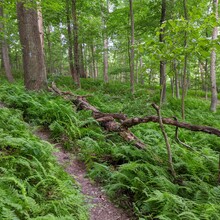 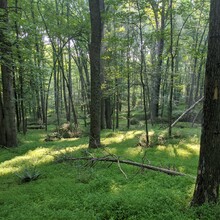 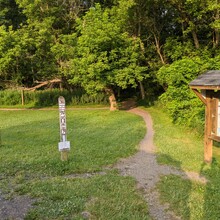 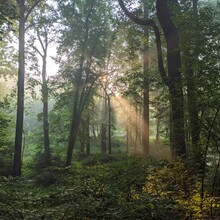 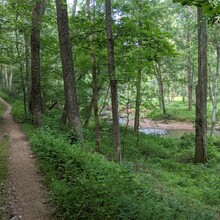 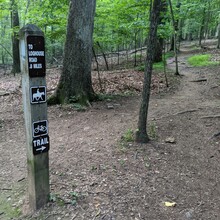 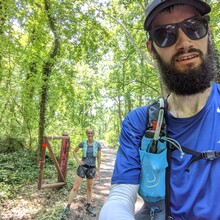 Wade and I met before dawn at Violettes Lock along the C&O canal, leaving my van with water and chips for the end of our FKT attempt.  We planned to tack on a few extra miles after the end of the FKT to hit a distance of 50k.  The full  moon was so bright that it lit the darkness along our drive into suburban Maryland where even the lights of DC seemed to fade into the distance.  After leaving my van, we drove in Wade’s car over to Shelldrake Court and parked in the lot along the trail.  As we began to hike over towards the high school where the other FKT runners began the run, a tiny owl (possibly a saw-whet owl) hissed at us from a tree.  Taking the little guy’s greeting as a good sign, we trotted over to the beginning of the trail and started our watches just before 6am.

The trail begins along a two mile section of pavement alternating with small wooden bridges over the creek before branching off into the woods.  In the first few miles of the run, we saw 20 deer - they studded the trail, lifting their elegant heads from the greenery, sometimes standing alone or in groups with does and white, speckled fawns.

Around mile five, we crossed Seneca Creek, splashing through the water as it was too high to stay dry and ascended a small hill as the morning mist burned off into a humid, warm day.  The trail here feels remote and is very green with fronds and ferns, native trees rising out of the greenery making a perfect canopy of shade for us.  There are houses and neighborhoods just beyond the edge of the trail, but you can barely sense them.  We crossed multiple roads, easily following the trail until about mile 12.  The GPS track was not clear and we couldn’t remember what the other runners had done - so we crossed over route 355 and over a bridge, before scrambling down a steep embankment and finding ourselves in front of the distinctive brown Seneca Creek Greenway sign.  There seemed to be a way under the bridge, but neither Wade or I noticed it.

The trail snakes around the road, follows a narrow hill under a bridge at 270 and runs back down towards the water.  This section of the trail was less well maintained and our pace slowed to accommodate the grass and rocks.  We passed under a large arch bridge before heading into Seneca Creek Park.  Around this time, it really started to heat up and both Wade and I were getting tired.  We carried water (Wade had 4L and I had 2L) and food.  Wade had a mix of cliff bars and GUs.  I had an assortment of bars and candy.  Wade ate every half an hour and I mostly ate on the hour - we both took salt tablets as needed.  The heat and up and down of the trail was starting to wear us out as we climbed up a slight embankment onto the crossing at Riffleroad.  We had dropped water, food and a change of clothes here, at mile 18 or so, on Saturday morning.  We crossed over the road, through a section in the sun under the power lines and back into the woods to where our dropbags were waiting.

A little dazed from the distance and the heat, Wade pulled the bags from the woods and we both started to refill the water in our packs and eat, when a pair of elderly bikers came across us.  The pair of bikers seemed as surprised by us as we were of them!  They somewhat rudely suggested we make our way off the trail, but nonplussed, we finished resupplying.  Somehow, our water was cold!  It was the perfect pick-me-up and we took off running again.

Shortly after our drop, the trail was rerouted through the top of a field laced with power lines (pics included). Back in the woods, the miles started to pass quickly.  Around this time, we ran through a field that was badly overgrown and had to hike through it unable to tell what was trail and what wasn’t.  Coming across Germantown road, we went up and up and up until we came out along the road at Blackrock Mill.  The trail past the mill leading to the bridge under Darnestown Road has an uncanny smell of pancakes.  Wade and I debated whether it is the grass or the clay underfoot there.  Either way, it is a very distinctive smell, and the red clay underfoot gives the landscape an uncanny sort of appearance for Maryland.

With about 8 miles left, the heat when we found ourselves out of the woods felt unbearable.  But, we kept moving forward knowing that we had almost hit our goal.  Crossing Berryville Road, we debated taking advantage of the rope swing into Seneca Creek, but opted to dip in the creek at the trail crossing as we finished up our last couple of miles.  Every time we emerged from the canopy of trees, the heat felt like a wave out of an oven.

We came out along River Road, crossed the bridge and started down the last leg of the trail - an exposed section of road running along the muddy creek.  We passed a strange little canoe shop on the right and in the turn around after the shop, right before the sign for mile 0, a large owl lay sunning itself in the road.  Its wings stretched out, brown feathers gleaming in the burning sun.  Our exclamations startled it into flight as we took the final steps to finish our FKT shocked at the sight of a second larger owl, left to ponder the meaning of the guardians of our run, the immensity of the distance and the strength we had found in running it.