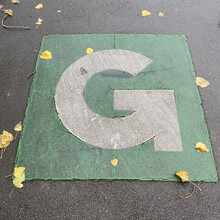 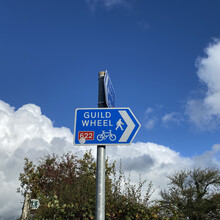 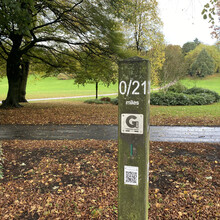 I decided to commemorate the end of my time working at Royal Preston Hospital by running the Preston Guild Wheel, a 21 mile greenway around the city.

I attempted the route unsupported with all supplies including water in my running vest. Having watched the weather forecast all week, a window of opportunity appeared to open up mid morning on 30/10/21. I set off clockwise from the 0/21 mile marker post at Avenham Park just before 10:00, avoiding the end of the local Parkrun.

The majority of the terrain was tarmac with clear signposting and only a brief segment of quiet road. Road crossings were well marked and pretty quiet overall. There were a couple of trail sections at the long-term diversion near Lea and Brockholes Nature Reserve. I encountered a few heavy rain showers but it was still t-shirt weather otherwise.

After crossing the post at about 20.9 miles on my watch and running a tiny bit further, I completed 21 miles in 3:39:11 elapsed time.

I couldn't find any record of other people's attempts so have submitted this as a new FKT. I'm sure my time will be beaten easily but hopefully this will encourage more people to get out there and run this tour around Preston!