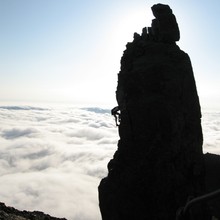 Es Tresidder set the previous FKT for this tough traverse in 3h17m28s on May 5, 2007, which he reports taking "nearly 15 minutes off the record".

A week of recovering, psyching up and organising helpers, and I was back on Skye for another attempt, snatching two days off work in the continuing perfect weather (details of last weeks attempt here). I got the bus up to Portree, where Ben Wear met me and gave me a lift to Glen Brittle, picking up a water bag which he agreed to meet me at the Inn Pin with the following morning. Last week I’d struggled with the high temperatures in the middle of the day, so the water stops were key to going faster this time. I also went for a bivi on the ridge and a dawn start to avoid the heat of the day. This worked perfectly, meaning I was well rested and the temperatures were quite pleasant.

The day turned out to be one of the most spectacular I’ve ever seen. The valley was slowly enveloped in a sea of mist, leaving the ridge the only thing floating above in the sunshine. It was like running in heaven.

The run itself was great, but not without its stressful moments. I steadily gained on Andy Hyslops splits from 1994, and by the summit of Sgurr na Banachdich, just under half way, I was eight minutes ahead of his schedule. I started to relax, visualising him over a summit behind me, surely it was in the bag? Then at Bidean, half an hour later, I had lost all but one minute of that advantage! I’m not sure how, but either I was going through a bad patch, or didn’t find the best line. Maybe a combination of both!

I gritted my teeth and put in a major effort going over An Caisteal and up Bruach Na Frithe, only to find myself 15 minutes ahead again! I was met here by Wendy Donnelly with some more water and half a banana. For the only time in the whole day, I went into the mist coming off Am Basteir, I panicked a bit in the confusion, but soon found familiar rock for the climb up Sgurr nan Gillean. I reached the summit of Sgurr nan Gillean a very happy man in 3hrs 17min 28sec, taking nearly 15 minutes off the record.

All that remained was the hitch hike home!

Thanks to Ben, Wendy and Mike Lates for the very generous support, it made a huge difference! Thanks to Ben for taking the shots below, lovely to have a photographic record of a very special day!

Split times for mine and all previous records on the ridge available here. Note that Andy Hyslop was memorising his split times in his head while running, and having seen my times, is unsure about his time on Bidean. This would explain my sudden loss of 8 minutes from the schedule!

Paul Diffley and Dave Brown of Hot Aches also made a short film of me trying the ridge record last year. Unfortunately they were unable to film my successful attempt, but they made a fun short film of last years attempt available here. There’s also an interview with me by Cameron McNeish here and an article by Colin Wells in the Sunday Herald here