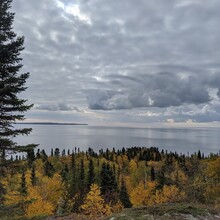 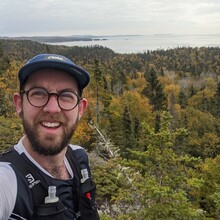 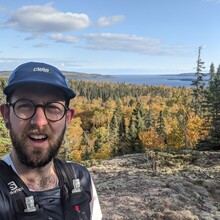 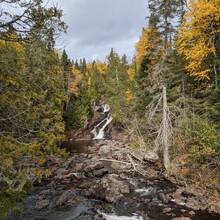 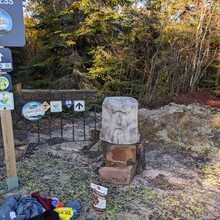 Started later then planned at 9:23am at the Aguasabon Gorge parking lot.

Running was easy and comfortable through this first section - got a great view from the Lyda Bay Lookout.

Saw crew on Hydro Rd S and ditched some layers while they drove beside me.

Quickly made it over to the Hydro Bay Camp Rd, where it turns out the Camper's Association at a gate set-up that we didn't know about! My crew had to run down from top of the road with food and camera gear. I ran back up the road about 500m from where we had planned to meet to catch them.

From here I was on my own until Schreiber Beach as we didn't have any extra hands to provide a Worthington Bay aid station.

Death Valley Segment went smoothly and was fun to play around on the coastal section while I was still feeling fresh. The Mt.Gwen climb was also still feeling fresh and strong - but my energy was starting to lag coming through the swampy sections on the backside towards Schreiber Beach.

Made it down and met with my crew and my friend Jacqueline who would be pacing me from Schreiber Beach to Rainbow Falls Provincial Park.

This section was certainly the most difficult sections of the trail for me energy wise. I had been eating mostly just Endurance Tap maple syrup gels with some peanut butter banana wraps at aid stations. By this point my stomach was mostly empty and I was feeling it big time. This section was also new to me and so I had mentally prepared thinking this would be an easier portion of the route - however it still keeps asking a lot of you right through the the end.

Made it to the Rainbow Falls parking lot about 30min behind my goal pace. Ate an entire piece of deep fried fish from a chip truck that Jacquline's partner Tyson so kindly shared with me. Sadly at this point I found out that my partner and our daughter were not going to be able to make it to the finish to meet me - which brought down my spirits a little.

Had to get up and keep running though with 12km left to Rossport. This section I had also never been on before and proved to be much more challenging than I had planned for. Lots of climbing to get up above the lake on the ridge lines with plenty of raised terraced beaches (massive rock gardens high above the current lake level).

Finally got some good trail coming down the final stretch to Rossport where I could really pick up the pace to try and finish as strong as possible.

Overall this is a super technical trail which proved to be the hardest I've run at this distance. So incredibly enjoyable though and a pleasure to be able to experience the whole thing in a single day.