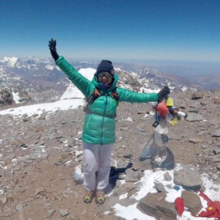 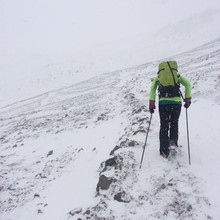 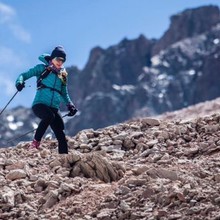 We know of no FKTs on Aconcagua by women prior to 2016. That year, Brazilian ultrarunner Fernanda Maciel set the women's FKT of 14h20m round-trip from Plaza de Mulas (ascent in 9h50m). Maciel was accompanied by a male mountain guide. She apparently spent about 4 weeks acclimating and training on the mountain, and attempted to ascend from the highway (as per Egloff and Jornet) a few days prior, but was unsuccessful due to poor conditions. A first report on her accomplishment is here (in Greek?!). Her attempt was reported in real time on Twitter #whiteflowaconcagua, and at redbull.com.br. In an audio interview with Ian Corless, Maciel discussed the difficult conditions she encountered on the mountain (mudslides, deep snow), and other details. Another interview is here (Spanish). Later than same month, on February 21, Maciel set the FKT from the highway / Park entrance, 22h52m RT (ascent in 14h05m), as announced on Twitter (@ferultratrail). Maciel's sponsor, Red Bull, provided a brief press release, and later a more detailed report with video.