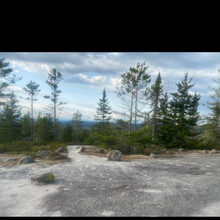 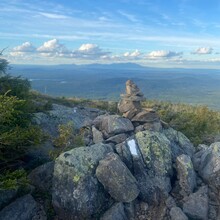 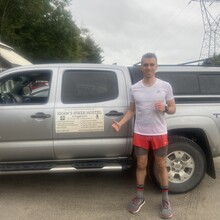 On Sunday, September 6th I was dropped off the the Appalachian Trail trail head by the good folks from Shaw's Hostel. I bid farewell and headed north into the Hundred Mile Wilderness at 5:35 AM. I reached Abol Bridge at 10:54 AM on Monday, September 7th, setting a new unsupported fastest known time.

I will publish a more detailed report later this week.

My Garmin 945 watch died about 26 hours in at mile 86 alongside Rainbow Lake (see Strava file) at roughly 7:50AM EST. I carried a Garmin InReach Explorer to account/solve for this very possibility. However, I was dismayed to find that the signal for that device missed the last 10 miles of the trail (the course is 96 miles not 100 miles, by the way!). At the present time, I am in contact with Garmin Technical Support to fix the issue. For temporary verification, I have included an iPhone screenshot atop the Rainbow Ledges at 9:05AM EST that Monday morning -  4 miles ahead of where my watch died and 6 miles from the the finish at Abol Bridge. So roughly halfway between the two locations. I also have secondhand verification from the folks at Shaw's Hostel who both dropped me off the the trailhead in Monson and happened to see me complete the course at Abol Bridge when they were dropping off a group of thru-hikers.

Note:  Finn also submitted a photo of himself at Abol Bridge.  The iPhone photo is in .HEIC format, which is not supported here, but we have confirmed the metadata which includes time and location.  The photo was taken at 11:04am - we accept his explanation that it took ~ 10min before someone came by and snapped the photo for him.

Here is my blog post on the FKT: https://www.finnmelanson.com/race-reports/100-mile-wilderness-report