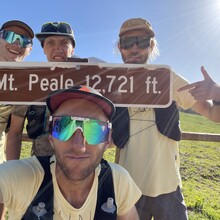 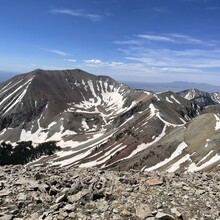 The route was tougher than expected! A lot of slow moving on the talus on most of the descents coupled with being at higher elevation for the first time in a while meant we ended up a lot closer to the prior fkt than we thought we would be. The little bit of snow that was left was not much help on the descents. The suncups were so large that we were going no faster than we were on the talus. It was a beautiful June day to be in the mountains though, and we had a blast (when we weren’t frustrated by smacking our ankles/shins on loose rock)!

We filled up on water in a stream around halfway in the geyser basin area. Would’ve been very tough to complete the route without that.