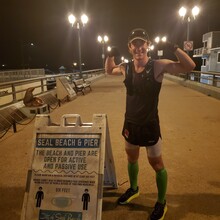 I ran the OC P2P this Friday September 11th and it went very well. I was originally slated to race the Kodiak Half Marathon Elite in Big Bear however due to the El Dorado fire things changed so I used a tapered and healthy body to push my limits on this FKT. I had a teamate run with me for the first 15 miles and another teamate ride her bike beside me for the rest of the attempt. No nutritional, route or pace assistance was provided and I carried my food and water in my vest. I got water twice along this route; the first time at Crystal Cove State Park from the water faucet and the second from a Chevron along PCH right before you enter the Dana Point city limits. I believe this is the fastest time recorded as the route currently on the site does not go directly from Seal Beach to San Clemente Pier and stops short. Also there is a part of the beach path that is closed as I went around the current FKT holder ran another part of the path that I could not map out and was likely not a viable option for other attemps. Finally my mileage was longer and if we align the runs I believe I had the faster pace per the 38.2 miles as originally stated. Thank you for all that you do!