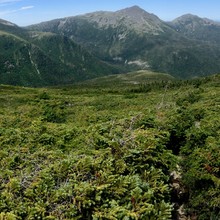 This is an engaging, steep, and talus-strewn loop through the Northern Presidentials that links some of the better scrambles and descents in the Whites while visiting beautiful ravines and choice summits. King Ravine is an enjoyable romp on giant talus and Huntington Ravine is a short but fun scramble up slabs and broken bedrock. The descents are the highlight in my opinion, however, from the never-ending rock staircase on the Tuckerman Ravine trail, to dodging tight krumholtz while tumbling over steep ravine headwalls on the Buttress and Wamsutta trails, to slightly faster well-trod but rocky ridge descents down the Boott Spur and Watson Path.

I started at 6:10a from Appalachia trailhead and finished just after 5p. I originally planned on carrying all my food, but ended up buying veggie chili at Pinkham notch in an attempt to dig myself of a deep hole. I had perfect sunny July weather and dry conditions. Water was abundant.

There were a few abnormalities to my route:

- Due to bridge construction near Pinkham Notch I was detoured from the Tuckerman's Ravine trail onto the Sherburne Ski Trail for the 0.4 miles between the bottom of the Boott Spurr Trail and Pinkham Notch.
- I misinterpreted the route description and took a wrong turn at the junction of the Huntington Ravine Trail and the Alpine Garden Trail. From there I went NW on the Huntington Ravine Trail to the Auto Road and NE down to the Wamsutta Trail, rather than heading NE on the Alpine Garden Trail past the Nelson Crag Trail and then onward to the Auto Road and junction with the Wamsutta Trail. My detour added 0.6 miles and 250 feet of gain to the route, partly on trail and partly on the Auto Road.
- I briefly got lost ascending the Madison Gulf trail and shwacked for a bit through the forest on thick mats of moss lying on rotting logs over porous giant talus.