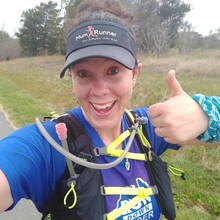 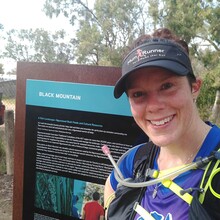 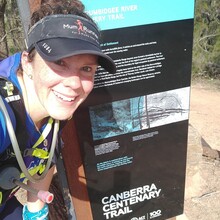 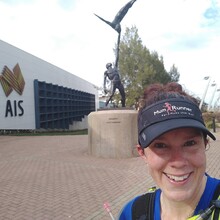 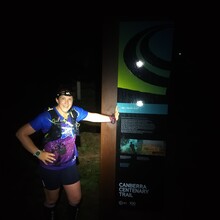 On Saturday 19th September 2020 at 3.55am I set off to run the whole Canberra Centenary Trail anticlockwise. I had 3 friends, Ian, Peter and Mark, join me for the start. It was great to have some company through the trails in the dark as it took my mind off the creepy sounds you hear when running alone. It wasn't long before I felt the heat. Even at 4am the weather felt muggy and we were all getting sweaty despite the slower pace. Peter and Ian left me at 6.5km in while Mark continued along. We ran until morning and witnessed the beautiful colours of the sunrise. At 19km, by the time we made it to Hall, Peter was there to greet us. I continued on with Mark until 24km and we parted ways the Barton Highway. I was grateful for his company and was ready to carry on alone. At 55km down in Coombs, Nic greeted me with a bottle of water and a bottle of coke. It wasnt until 60km that I had a surprise greeting from Tyson, who continued to run with me for 6km. We stopped for photos and filters and had a great laugh. He left me as I turned on to Namatjira Drive.

The long stretch down Kambah Pool Road was really hot. Thankfully hubby Pete met me along the way at 69km with water and the offer of refuelling. As I had assumed, I over-catered and I was still going strong with the nutrition I had already packed. I did pick up a few more brownies, as they were pretty calorie rich for the small portions! I said goodbye to Pete and continued on towards Kambah pools. Encountered my one and only magpie swoop along this path! Running turned mostly to walking along the Red Rocks Gorge, as the heat was really getting to me. Didn't see anyone until 81km when my friends Alex, Will and Karen chased me down at Tuggeranong Town Park offering a slushie and hot chips. It was here that I was hoping to meet Sarah with an extra battery pack as my phone was running low on battery at 14%. Sarah was no where to be seen, and I was conflicted between waiting for her in a common spot or continuing on. Lucky for me I continued on, as I didnt see Sarah for another 45 minutes when my phone was desperately low on 4%! At 82km Nei-ke joined me for 2km, assuring me Sarah was on her way. Finally Sarah found me at 86km with a spare battery pack and more hot chips.

I decided to walk on while my phone charged for a bit. As I started to run again, I met Liesl at 94km and we ran together for 3km along Isaacs Ridge. We stopped along the way at her car as she offered me another battery pack and helped me work out why my bladder straw hadnt been working for the last 15km or so.. Turns out the straw had come out ever so slightly and as a result there was no water flow! Night fell as we ran into Nic, waiting for me with a headtorch as I said goodbye to Liesl.

At 100km it was a real surprise to see my family waiting at Hindmarsh Drive with balloons, torches and party poppers. They were as thrilled to see me as I was to see them. A quick top up of water and I was off again. Only 4km later I met Scott, Sara and Liesl at the top of Red Hill. It was so nice to see some friendly faces cheering me on. I walked a lot through the city and Capital Hill. Luckily the detours were still in place from my last recce run so I knew exactly where to go. It was almost 8pm at 111km and I heard cowbells ringing as I ran down Bowen Pl towards Kings Ave. Sam was waiting for me with hot, salted potatoes, a spare headlamp and a fresh apple. We walked together for 2km until we met Sarah for another bit of moral support and Pete, ready to ride the rest of the way home with me. I was behind my estimated schedule so I had to let go of the hope of finishing before midnight.

We met Mim soon after Pete and I arrived at Mount Ainslie where we ran together for 4kms. Nic and her dog Reason came out at 10:30pm to cheer me on. We said goodbye to Mim and continued on. At 126km Nicole and Kev came out to the Hughie Edwards rest area to cheer me on and offer some coke and ginger beer. It was so nice to see friends so close to the home stretch. As Pete and I continued on under the Federal Highway, it started to rain ever so slightly. Given how hot I had been the whole day, it was such a welcomed relief. As we continued on we saw a headlight in the distance. At 131km we met Peter again at Goorooyarroo Nature Reserve. He joined us for the last 7km. With the rain getting heavier, and the end in sight, I found the energy to pick up the pace. Pushed hard, running for the longest time in a long time, and my last km was amazingly my fastest! At 21:32:18 I had finished in the same place as my run had started. Epic adventure accomplished. Now to ponder whether I should Strava the 400m hobble home..