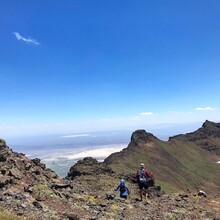 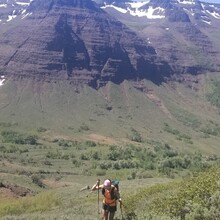 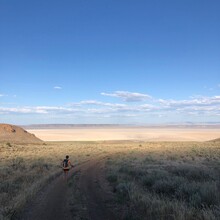 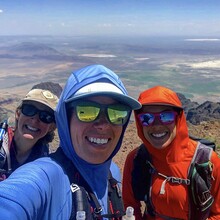 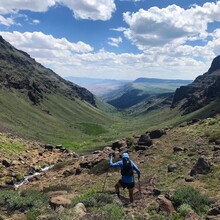 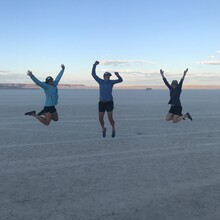 Kristina Kurcinka, Heather Laptalo, and Becky Schreiber began a west to east traverse of Steens Mountain on Saturday, July 4 at 7:45 AM starting from the Big Indian Gorge Trailhead at the South Steens Campground. We covered the first seven miles of the Big Indian Gorge Trail in just over two hours before arriving at the gorge's headwall. There is only a faint trail through this steep and scrambly stretch, but the expansive views motivated us to continue up the headwall until topping out on Steens Mountain Loop Road. We followed the gravel road across the ridgeline to arrive at the summit trailhead parking lot around 1:45 PM, where we quickly resupplied with our support van before continuing up to the summit.

At the summit, we enjoyed our first glimpse of the Alvord Desert to the east before dropping down to Wildhorse Lake via a south-side slope from the summit. Initially, the downward trip through Wildhorse Canyon went quickly as we followed the course of rushing waterfalls between staggering green ridgelines. But our progress slowed considerably over the course of the next five miles. There is no trail through Wildhorse Canyon and much of that section is choked with sagebrush and other obstacles, making forward movement and route-finding extremely slow and difficult.

We cleared the worst of the bushwhacking when we crossed a small saddle to begin the final descent to the Alvord Desert. A large cairn marked the turn where we eventually connected to a rough dirt road that we ran down until arriving at the Alvord Hot Springs at 6:50 PM, thereby completing the Steens Mountain west-to-east traverse. Our support van was waiting with recovery milkshakes from Fields Station -- we can't think of a better way to toast the completion of this burly traverse.

It was a long and challenging day, which tested our navigation skills and grit. And while the steep terrain, cross-country travel, and impenetrable sagebrush were all major obstacles, we were lucky to have clear skies, no bugs, and spectacular views to carry us through the day. This route is truly one of a kind in Oregon.