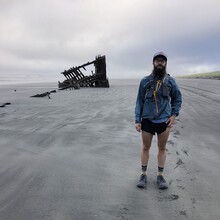 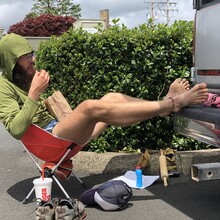 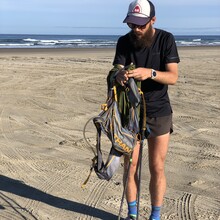 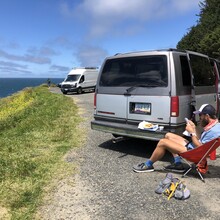 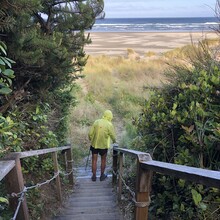 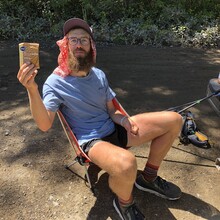 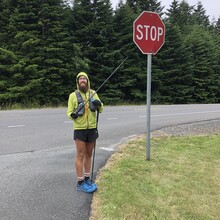 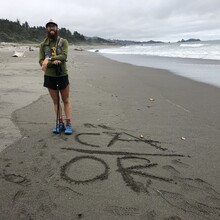 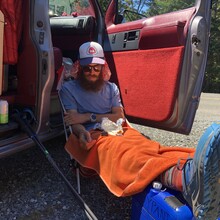 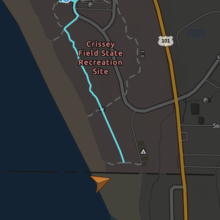 I was van-supported by my wife for the entire route with two friends visiting/supporting for a 24 hour period on the 7th/8th days. I ran north to south and followed the official OCT route except for when tides were high and beach running not safe or feasible. Because highway 101 often parallels the beach just a few feet from one another, this did not add or subtract significant mileage, if at all. I also did not use any ferry service to cross the major bays as described by Oregon State Parks and as previous record holders have done. Forward motion by motorized means doesn't seem to be in the spirit of FKTs. I used a Garmin inReach (tracked every hour) and a Coros watch to track my mileage. My watch ran continuously, so times are overall moving time for the day including rest breaks.

Days 1 and 2 were pretty smooth and felt good because I was fresh and pumped to be out there. These days, and the entire route, were a mix of beach running, highway running, and beautiful singletrack over the headlands of the northern coast. I crossed Sand Lake estuary at night on day 2 when the tide was out and saved myself a few miles by not having to run the road route around. This was a definite highlight of the trip, navigating a dynamic tidal zone in the dark with fish, crabs and chest-high water sometimes covered in seagrass so that you couldn't see below you. Other major crossings were either already officially routed over a bridge, or I hit them at low tide and crossed with no problem. Other than Sand Lake estuary and its chest-high water, other crossings were no more than thigh-high.

I quit on day 3 in a low moment. I had taken a 4 mile wrong turn early on, and the fatigue was starting to settle on me. I also had a lapful of Dairy Queen, and rest just sounded more appealing. I showered that night at the Lincoln City community center and went to bed feeling pretty low. The next morning brought regret, I didn't feel as bad physically, and the record was still possible. I had a very slow start to day 4. Consumed a lot of gas station food and drove back to where I quit the previous day to start again at 10AM. 44 miles for day 4.

From then on, I managed just above 50 miles a day. The terrain on the central coast became more sandy and the beach sloped, which made for tiresome running. A friend of mine ran with me for 24 miles on day 6, and the next morning my wife ran with me for 10 while our friends drove the van. The southern coast turned a little more hilly and the forested headlands returned. Day 8 was slow going due to soft sand, confusing trail over Cape Sebastian, and high tides that pushed me up to the road. Visibility was no more than 1/2 mile with heavy marine fog, and the tide was up, so I finished the day on the road for safety reasons. Again, not adding or subtracting significant mileage. I finished quite late on day 8 with just 19.5 miles to go in the morning.

The last day started out with the beautiful trail section of the Boardman Scenic Corridor. Slow going for me at that point. I hit highway 101 a little north of the town of Brookings, saw my wife one last time outside of town, and then booked it the last 9.5 miles to the finish. I finished on the beach using Google Maps and Gaia to determine the state line and end of the trail as there is no official endpoint on the beach. My wife made a finish line of driftwood well into California to be on the safe side.

The Oregon coast is spectacular and quite varied in its terrain and people. We stealth camped in our van every night with no major issues. My wife was approached by a man with a footlong wrench one evening while waiting for me to finish and on several occasions said she felt uncomfortable being alone, so perhaps an unfortunate word of caution for the female runner/supporter. Quite an experience overall!