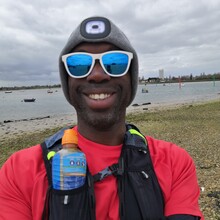 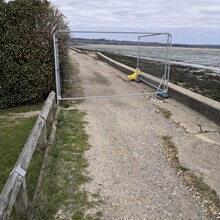 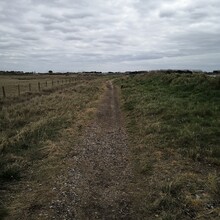 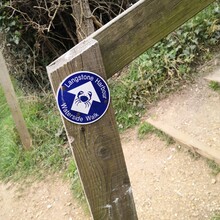 I did this run on the 7th April 2021, starting at roughly 12:40pm. I wanted to run at low tide to avoid any potential issues with wet feet when running on the beaches, plus due to the cold snap, I wanted to run when it was a little bit warmer. I ran this route clockwise (clockwise always seems easier to me), starting from the Eastney side of the Hayling ferry and finishing on Hayling Island.

The route was as expected - apart from one diversion where the coastal path just north of Milton Common was closed off due to sea defense works (see picture). At this point, I had to divert briefly back down onto Eastern Road before rejoining the coastal path later on.

Once you get to Farlington Marshes, the route is well signposted with blue "Langstone Harbour Waterside Walk" stickers, as shown in the photo. However over time, some of these have become faded or damaged.

Due to this route being coastal in nature, it's probably best to run it on a day with low wind speeds.

I ran this unsupported, carrying my own food and drink with me.