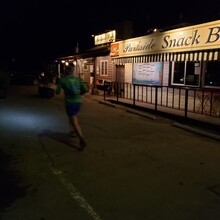 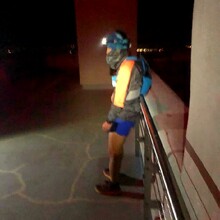 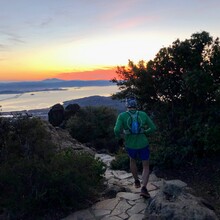 Late Fall is a great time for this route since the trails aren't totally muddied yet and the inland heat has finally let up.

I started from the beach at Stinson just after 5 AM and took Steep Ravine to Pantoll for a more direct route, instead of going through Cardiac, . From the top of Tam, I mostly followed Franz's route.  I definitely appreciate the thought that was put into minimizing road as much as possible.  The combination of descending Widowmaker and all the pavement running from Larkspur to Wildcat Canyon definitely had me feeling a bit worked sooner than I expected.  The climbs in Wildcat Canyon, Briones Reservoir, and Briones Regional Park look like little hills on the course profile due to the mountains on both ends of the course. However, they have many steep and short climbs that eat up your quads, all the while with the final climb up Diablo looming in the back of your head.  It was after sunset by the time I topped out on Diablo with the wind howling and the temperature in the 30s.

Jessi and Kati crewed me for a good part of the day by meeting me at a few key points for refills.  I tried to make note of the fountains used by the unsupported folks in case I ever come back by myself.  We did a crew change in Walnut Creek, after which William and Emi joined me for the push up Diablo.

I mentioned to @runspired that it'll be cool to see the route get refined with more traffic and the potential incremental gains from new variations.  I'm sure we'll hear from him at some point about establishing particular waypoints that he's discussed with David Von Stroh!