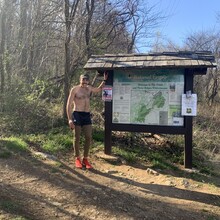 Priest and 3 ridges fkt, holy fuck that felt good. I’ve done like 45 laps of the priest and 25 of the 3 ridges in the last 5 months. Feels good to go fast. Feels good to race on my home(ish) turf for once. I remember when I first ran three ridges two years ago, I checked Neal Gorman’s splits and thought that would never happen. Then Michael Dubova took it faster and it figured I might as well take a swing. Big props to Michael for doing this in October. That’s literally insane with the leaves.

Conditions were perfect. Tiny bit of mud. I rolled with a super light belt with two gels and an empty soft flask. Filled up out of the stream past 3 ridges summit and had the gels. Chugged a hand bottle with two scoops of tailwind at 56 and grabbed two gels. Refilled the flask at the stream on the priest climb and at the shelter. Ate one gel on the climb and one at the shelter.

Wore Salomon SLAB Sense 8’s. Super fast on the up but idk about the downs, I felt sluggish. The Speedboats just annihilate the downs but are not nearly as nice on the ups.

Started touching the sign with my foot, finished with my hand on it. Touched the shelter.