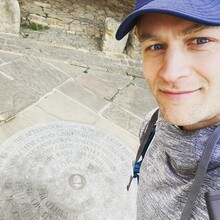 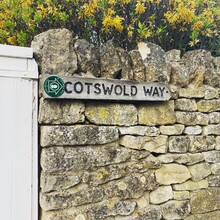 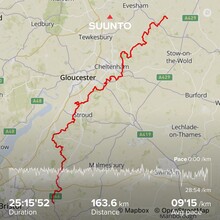 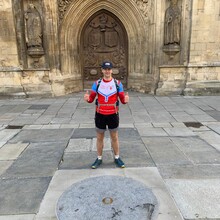 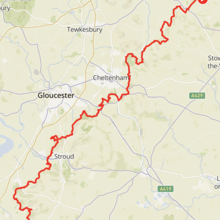 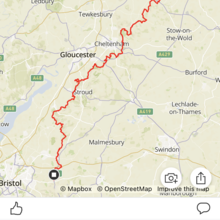 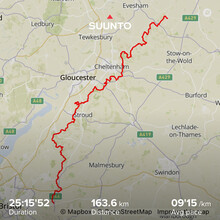 On 1st May 2021, I set off from the Chipping Campden end of the Cotswolds Way at 7am, with the intention of becoming the first person to complete the 102-mile route in one go, self-supported. The gentle hill out of the town rewarded me with the first incredible views of the route, over a hazy mist engulfing Worcester and Warwickshire. The blissful feeling of having the English countryside all to myself meant the first hour was a breeze as I climbed up to Broadway Tower and descended into the town of Broadway at the 9km mark.

Out of Broadway the hills started to get a bit more serious, but I was able to keep on track through the quintessentially English villages of Stanton and Stanway, with narrow streets lined with thatched cottages, to hit half marathon distance without incident.

Winchcombe (at 30km) was the first opportunity to stock up on liquids and a climb out of the town then turned into rolling fields. The scenery changed in the blink of an eye, from hills, to woodland carpeted in bluebells, to tracks lined with thistles, to farmland, with sheep and cows watching me inquisitively as I ambled past. As marathon distance approached, a climb up Cleeve Hill was tough but worth it for sensational views over Cheltenham, Gloucestershire and even Wales’ Brecon Beacons in the distance.

After a hill up to Lineover Wood, I enjoyed a gentle stretch of wooded flat running around the 50km mark and made it to my next drinks stop at the Crickley Hill Visitor Centre (60km), where I proceeded to buy the shop out of all of their bottled water and treated myself to a can of Coke. It was here that I also treated the first hint of a blister on my left heel, but with the power of Compeed, it proved to be only a mild irritant and nothing to slow progress.

Through woodland with a view over Gloucester (at around 73km), I made the mistake of tempting fate by thinking to myself, ‘I’m really enjoying this,’ only to badly stub my toe on a tree root … twice … leaving me hobbling for a couple of 100m sections. I cursed the tiredness setting in which meant I wasn’t picking my feet up.

Gentle inclines out of Painswick quickly became less gentle and the going got really tough through Edge Common and up to Haresfield Beacon (at the halfway mark), though more spectacular views (this time over the Severn Estuary) were the prize. The Co-op in Kings Stanley served as my next stop for liquids and an hour later, with the light fading at the 95km mark, the headtorch went on.

If the hills had been bad up to this point, they became hellish at 100km, with a 35% gradient up to Cam Long Down, and then a long descent into Dursley, followed by a succession of huge climbs and brutally steep descents out of the town and then into North Nibley and Wotton-under-Edge. It was slow going in the dark, with the uphills taking their toll on the legs and lungs and having to take the downhills carefully to avoid turning an ankle on rocky ground.

At 120km, a mini natural waterfall in Splatt’s Wood and some water purification tablets gave me the liquids that would see me through to the end and it was shortly after this point that I got an energy spike and enjoyed a couple of hours of quiet night-time running at a steady pace, reaching Tormarton and shortly afterwards, the M4.

That second wind blew over, though, and not even the hint of the sun emerging in the east could stop me from deteriorating with around 20km to go. Overcome with nausea and feeling like I was going to pass out, I sat on a bench outside the Dyrham Park estate, fighting the urge to have a nap.

Forcing myself on, the next few miles were hell, but I got a boost of adrenaline at completing the final big climb up to Lansdown and reaching familiar training run territory around Bath Racecourse. The day fittingly ended as it had begun, with a morning mist, the city of Bath hidden below me as I ran past Kelston Roundhill. I dropped into Weston, did the final short climb up to Summerhill, and ran through Victoria Park, past the Royal Crescent, through the Circus and down into town. As the Abbey loomed, I curled up in a ball on the limestone slab that marks the end of the route at 8:15am, delirious with fatigue but ecstatic at getting the job done.