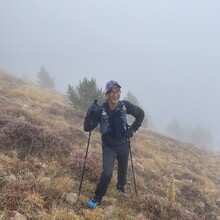 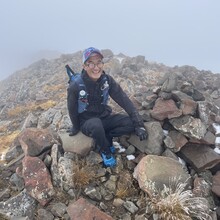 Started at 7:56am MST at the Grape Creek Trailhead below Music Pass due south east of Westcliffe, Co

First 3.4 miles up the pass move from steep ascent fire roads (about 2500 ft of vert in first 4 miles) and moves into single track for the last mile up to Music Pass. Music Pass has breathtaking views looking out to the cirque which is formed by Music Mountain, Marble Mountain and several other peaks. From there the real challenge begins. The route is largely off trail with some connecting game trails as you move above tree line and into a 25-40% graded climb up the saddle to the traverse - from there the next 1.6 - 1.8 miles to the summit are on an exposed traverse of skree and alpine tundra until you reach the peak at mile 6.3/6.4. The peak summit is marked by a Carin. On a normal day (with summer conditions) the route would be easy to maneuver. Our trip was slowed due to extremely poor visibility (less than 20 meters) and intermittent snow & ice storms with some ice settling on the traverse forcing us to slow our pace. Temperatures were between 25 - 33 degrees.

We reached the summit and turned around with conditions largely remaining the same for the entire time we were on the traverse. When we descended the traverse which had no trail we quickly became disoriented even following GPS watches, and took a slightly different route down the upper saddle of the mountain down to Music Pass. This added about an extra mile to our trip down the mountain. From there once we reached the pass we were easily able to descend back to the Grape Creek Trail Head without issues. Overall an awesome trip with fall & some winter conditions.