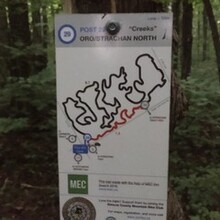 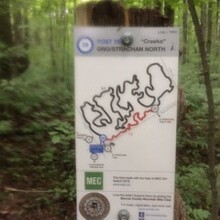 This is a great little loop about 5 min away from where I live.  So home court advantage you could say.  The Simcoe County Mountain Biking Club has so many great trails in the area, but I feel that "Creeks" is the crown jewel.  I wanted to get this done early for cooler temps and also to avoid dodging mountain bikes.  I started at 6am and it was still a little hard to see in the bush.  And with many roots, I had to be careful.  I think I may have actually went out a little too hard.  I went clockwise which means you hit a lot of downhills early on.  I decided to bomb them as fast as I could.  The plan felt like it was going well, until I started hitting the uphill sections.  I didn't really run up the hills as aggressively as I would have liked.  Nonetheless, I'm happy how it all played out.  No better way to start a day than with an FKT!