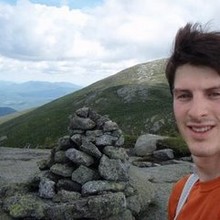 Cave Dog's ADK46 record stood for 6 years, until it was broken by exactly 1 hour during June 24-27, 2008, by Jan Wellford, 3d17h14m. In an interview, Jan makes some interesting comments about the issue of style in the ADK46. In particular, Jan started his timing at the first trail head, rather than as the base of the first mountain as Cave Dog had done (adding roughly an hour to the time), and he originally intended to avoid private land and access roads, though ended up using some private access.

Because I was behind schedule so early on day 2 I was forced to hike some extra miles in order to make the route work. For example, it is easy to bushwhack from Dial to the Dix trail, but I wasn’t on Dial until after 9 pm, so the bushwhack would have been in the dark and the Dix Range would have been very difficult because of the late hour. I hiked about 153 miles—I initially thought I could do the entire route without private land in as little as 145 if I did it properly. -- Jan Wellford

As is always the case in mountaineering, "rules" and "style" are key questions for each climber.