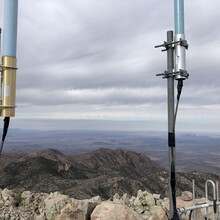 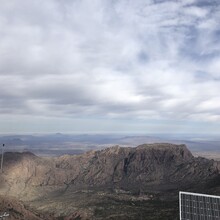 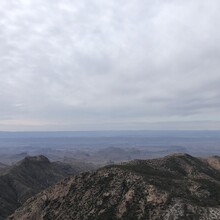 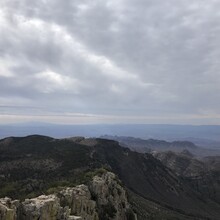 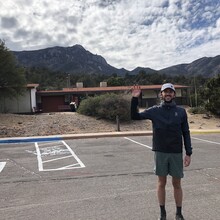 First hiked this trail back in 2014 and have been wanting to come back to Big Bend NP ever since. Saw that it became a FKT route not too long ago. Came down from Boston and have been staying with family in San Angelo for the fall and heading back north in a few days, so it was a kind of spur of the moment decision on Wednesday to plan this trip out with the hopes of nailing the FKT before leaving the area.

Was about 35 and overcast at trail head - started off in shorts, long sleeve shirt and lightweight jacket and had to shed my jacket and throw down a Huma gel about 1.5 in.

Inclines were rough at times and had to start speed hiking the stairs and then running the flats and rolling hills. The last chunk of Pinnacles trail until it meets Emory Peak Trail is just basically a staircase.

Forgot how sketchy and vertical the last bit is to get up to the peak. Was not mentally prepared to literally climb.

Right away on the way down I started descending the wrong pathway - caught it just in time before I would have really gotten into some trouble getting stuck on the side of the mountain.

Running down I just let gravity do its work and hoped my legs could keep up and find the right fitting. Absolute miracle I didn't break an ankle at least a half a dozen times haha. Super fun run!

FYI: anyone looking at attempting this run should make sure to check in with park ranger ahead and ask about potential sightings of bear and mountain lion. I spoke with them in the morning and in the last couple weeks several campers/hikers had spotted either bear and mountain lion at various spots on Pinnacles, Emory and Boot Canyon (kind of anywhere between campsite PI1 - 3 up to BC 1 - 4. I purposefully started the run a little later than I originally intended to give any campers and hikers enough time to hit the trail and spook any critters that may have been around in the early morning.