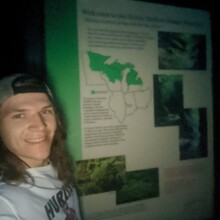 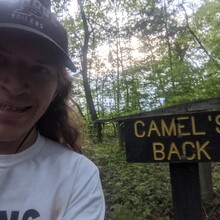 After eyeing this record and route for the past month or so, I decided at the spur of the moment on Sunday night to go for it. Overall, the time can definitely still be lowered- sub 1 hour is easily doable by someone who knows the route and is in better shape than I am, but I'm happy with this.

I've been thinking for about a month that I would get to Turkey Run and give this a go, but hadn't made any solid plans. For the last week and a half, I've been dealing with a cough and sinus cold (not covid), so I kinda decided to myself that I would go Monday or Tuesday. Sunday night at 6:00 came and I looked at the weather, which indicated solid chances of rain for Mon & Tues. Knowing this route is a lot harder after it has rained and the water is flowing higher, I decided at the last minute to drive down on Sunday night and try to get in a run before dark. So, I drove the hour from West Lafayette, and got started around 8:00p, with sunset happening at 9. This definitely made me feel rushed to get out on the trail and start running, which is probably why I started out hard.

I wolfed down as much water as I could and a bit of food before starting, as I carried no water (all I had was my phone and keys). I did start feeling the thirst probably 2.5 miles in, and my mouth was dry by the end. It felt quite humid, and my shirt was soaked through with sweat by the end.

As far as the run itself went, I started out probably a bit too hard, running most of the uphill which constitutes the first .25 of the course or so (Clockwise Direction). Looking back, hiking it would have probably kept the effort lower and my HR lower, but it is what it is. For the rest of the run I tried to follow the plan of hiking the ups (stairs) and running most of the flats and downs. The stairs definitely slow you down, but they can provide a good break. On the flats, I'm guessing I averaged about 8 min/mi pace, trying to push it where I could.

I did have a few issues with navigation, and lost probably 3-4 minutes over the course of the run total due to this. I had hiked most of the route ~3 weeks ago, so that definitely helped, but other than that all I had was my watch's gpx track, which helped a bunch, and my phone that I had pulled up some basic maps of the route on. The biggest slow down was around the 20 minute mark, when I lost ~2 minutes trying to figure out which trail to go down. That point isn't marked very well, and the route goes down the "140 stairs" at that point, which looks like a random staircase leading off into the wilderness, and not an actual trail. I made the right decision in the end, but not before frantically pacing around for about 2 minutes.

Thankfully, the water was low when I went, and so I was able to completely avoid getting my feet soaked. There is a part where you're literally running up a waterfall/creek, but thankfully it was not flowing very intensely, and I was able to move through it easily.

Most of the runnable portions come in the back two-thirds of this course, at least when running clockwise like I did. I pushed where I could and tried to keep my pace up while running along the river. It got dark about a mile before I finished, but was still light enough to mostly see where I was going. I stumbled a few times, and had one more navigational snafu around the coal mine area, where it is terribly marked, but pushed through to the end and finished in roughly an hour and 4 minutes.

The time can definitely go down by someone who is in better shape than me and knows the course better. Sub 1-hour should be doable, considering the roughly 3 minutes of time I lost due to navigation. I also ran a bit over at the end, stopping my watch a bit past where I actually started. I did get lucky with the water being quite low, and the temperature being pretty cool, but these things can be planned for fairly easily. Overall, I'm happy with my effort, and it's nice to get my first FKT!

Last thing: s/o to Dylan Bowman's Pyllars Podcast episode with Ethan Newberry that I listened to while getting this thing done. I love listening to podcasts while running, and this was the perfect episode for this specific adventure!