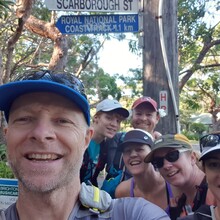 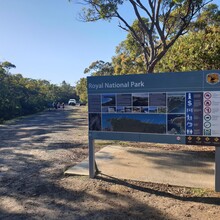 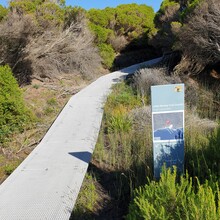 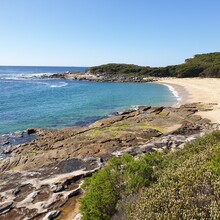 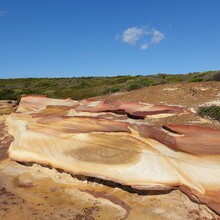 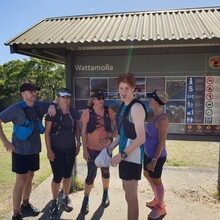 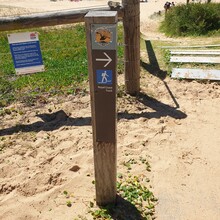 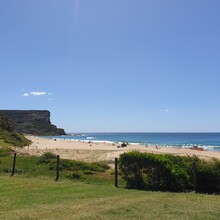 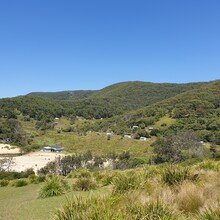 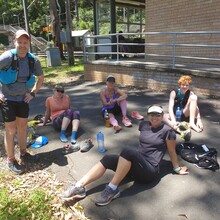 Coast Track Supported FKT. A mixed gender team (Jase, Carolynn, Lisa, Gavin, Rachael and Declan) set off from Bundeena at the Northern Terminus of the track a little before 0800hrs on Sunday 06/12/20. Conditions were cool, however were to heat up later that morning. We ran as a team along the coast, undulating trail over sandstone rock against a beautiful aqua blue South Pacific Ocean. There were no clouds in the sky and the sun was rising and we had no protection. Later we crossed over beach coves and the track undulated, also due to waterfall run off. We resupplied water from the run off using a Katahdin water filter. Later the track passes through hilly grassy coves dotted with huts that were erected during the Great Depression. The NSW Parks and Wildlife Service allow residents to maintain and lease the huts. Later the track starts to climb the higher coastal hills and turns inwards towards land and we climbed into Eucalypt forest which afforded us shade from the midday sun. We passed Otford Lookout and then ran down the hill to the Southern Terminus at Otford Railway Station. This track was approx 28 kilometres with approx 940 metres of elevation.