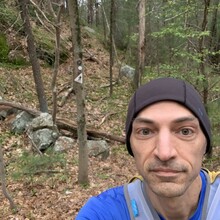 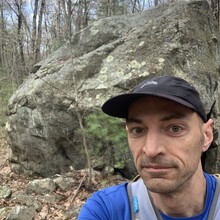 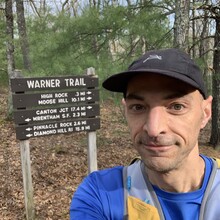 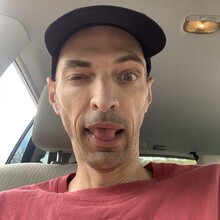 I did this route from north to south in unsupported style. I carried a single flask with a BeFree filter and never wanted for fresh water along the way. I did not run with anyone or meet anyone along the way.

I broke it down into four sections and it very much went to plan. The first split was 1h 6m to I95, 2 minutes under target. It starts out rather fast and flat until you get to Moose Hill and then you've got a few rocky hills to go over.

The second split was 1h 13m to Rt 1, right on target. I was surprised by that though as my watch was showing 9:20 pace, so the gps mileage must have been over. This part takes you through Neponset Reservoir (easy), North Foxboro and Gilbert Hills State Forest (harder).

The third split was 1h 32m to I495, a minute over target. Pinnacle Hill was a tough area and the back side of Wrentham State Forest has got undulating bumps from bikes and other vehicles, some of which I heard in the distance. Then its up Knuckup Hill, a steep straight climb with an old ski lift on top. Then through Wampum Corner and the abandoned rail bed under the highway. I was playing catchup towards the end of this section, and did manage to catch up. I was in a good position now.

But in the final section things began to fall apart and I played damage control. I felt increasingly hot and nauseous, was one gel short and my legs were unable to climb even modest hills towards the end. The Red Brush Hill area is confusing and technical on the back side with two false peaks. I just tried to keep things moving since I knew there is a long easy road section afterwards. Most of it is along Burnt Swamp Road, in spite of the name, is scenic rolling farmland. Then I went through Diamond Hill Reservoir. This was the hardest part, since nothing was assured and it is confusing, technical and rocky and I was feeling worse. Diamond Hill is the final piece and probably the most challenging along the route, if it weren't for the fact that I knew it was the end and there was time in the bag.