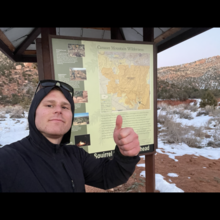 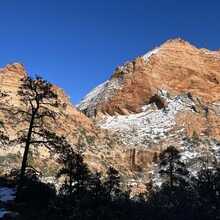 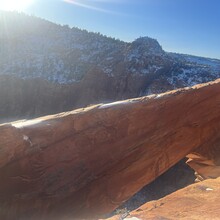 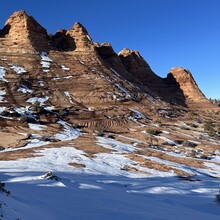 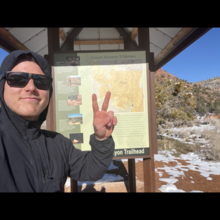 I have been living in Hildale for the past month and finally attempted this legendary route. In town, a few locals mentioned that it was possible to stand on the Eye of Heaven Arch. They said it would be much more difficult due to recent snow and winter conditions.

After crossing Short Creek, snow levels gradually increased until the turn around. It was clear I was the first one to reach the  Squirrel Canyon summit in some time. Postholing was required from the Squirrel Canyon summit to the Arch. The snow varied from 1 to 3 feet deep and significantly slowed my time. That said, the views along the way were beautiful. When I finally reached the Arch, I crossed half way (not part of the FKT gpx route). I would not suggest standing on the Arch in snowy conditions. The route back was slightly faster, as I was able to follow my foot prints.

Please note that in the submitted gpx file, my Garmin InReach Mini stopped tracking close to the top of Squirrel Canyon, although the tracking did not turn off. Cell service is lost several miles from the trailhead. I suspect poor coverage is the culprit for my tracking abruptly stopping. I have attached time-stamped photos at the trailhead from the beginning and end of the run as verification of start and end times since the Garmin cut out.