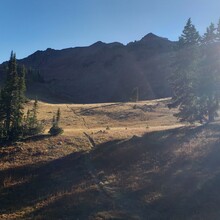 This is one of my favorite loops in Summit, and one that I had planned to give a solid effort on for some time. A friend reached out and gave me a nudge on Sunday, so I decided now was the time. I'd only previously run the loop casually in the morning and mid-day, but I have to say the evening light on Buffalo, Eccles and upper Meadow is spectacular, and I think afternoon starts will be recurring in the future. Based on the previous, recent FKT, I set an arbitrary goal to reach the pass in an hour. It looked questionable as I reached treeline, but I still managed to crest it 59:20, putting me 11 min ahead of the previous standard, and giving me a good shot at my total goal of 2 hrs. Luckily, the descent stays technical enough that my lack of pure running ability wasn't much of a hindrance, hitting the Lily Lake turn off at 1:29. With aching IT bands, I pushed up to the lakes and did my best to keep on the gas back to the TH.

The trail had a bit of recent dead fall in S. Willow, but nothing horrendous. I grabbed a few ounces of water at the last fast-ish feeder creek before treeline on the S. willow side.