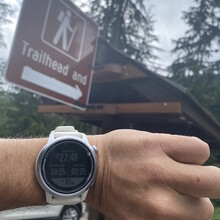 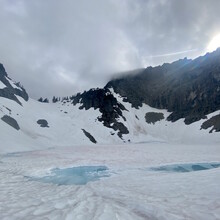 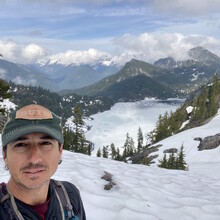 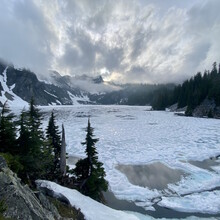 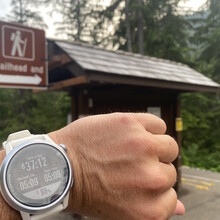 I completed a full clockwise loop, solo & unsupported, of this route from the Franklin Falls parking lot east of Forest Rd 58 and followed the paved road to the Denny Creek TH. I followed the same route as posted by Mark Griffith and exited at the Alpental TH, then completed the loop by running the paved road back to the beginning of the loop at the Franklin Falls lot. I missed the TH-TH FKT by mere seconds or it's just too close to claim and I intend to rerun the loop later in the month when snow cover has decreased. I did complete the full-loop variation in 5hr:09min.

I chose a terrible day to run the route on a holiday weekend with disaster traffic in the area and I passed 150 people/dogs on the Denny Creek trail up to Melawka Lake. There was no one on the north side of the loop and I only saw 10 people on the Snow Lake trail near Alpental. It is still too early for a safe traverse and there was nearly 100% snow coverage from Melakwa Lake to the pass below Snow Lake. The ridge traverse from Chair Peak Lake to Gem Lake was steep and quite risky and I spent over an hour making a safe climb up to Gem Lake. I was expecting a fast last few miles after climbing out of Snow Lake, but snow persisted on the south side of the pass. Also, the trail is very rocky and although, runable, I just couldn't put up anything fast the last 2 miles. I was a bit confused on which TH sign to complete the run but reached the trail end at nearly an identical time of 4hr:43min. I closed the loop using the paved forest road back to the Franklin Falls start. I want to do this trail again and I hope a significant amount of snow had melted off when I return at the end of July. But I recommend this route either be done a winter loop in April/May or summer version in Aug/Sept. I think the mixed conditions in June/early July make it quite hard and sketchy.