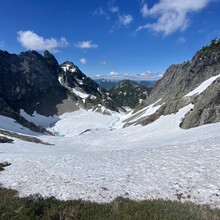 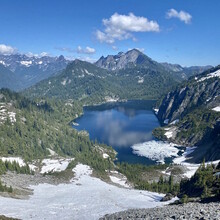 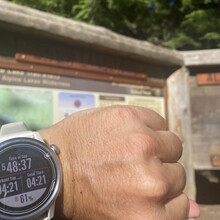 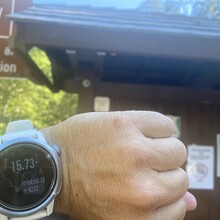 I initially attempted this route July 3 but the level of snow caught me unprepared. I was also uncertain which TH sign to end at and was just too close to determine whether I made it in time. So I returned July 18 hoping for less snow coverage. The snow had pulled back just enough for a safe trip although quite a lot still remains around Chair Peak Lake. The ridge traverse from Chair to Gem still had snow but was much safer and faster this time. Snow Lake has changed drastically and little remains. On July 3rd, the holiday weekend, I passed ~150 people on the trail, mostly from Denny Creek to Malakwa Lake. On Saturday, July 18, I passed a mindblowing 600+ people and dogs (I stopped at 600 just before the trail end). This def slowed me down a few min but when you're running without a mask, most people freak out and move aside pretty quick. This is an amazing loop, but do NOT go on Fri-Sun. 1000s of city people flood in and traffic and parking is a disaster. The trails are crammed on both ends, but I was alone from Malakwa to Gem. I also improved my complete loop time, from Franklin Falls TH and back to 4:56:33 but I don't feel that's significant enough for a new time over my old 5:09.