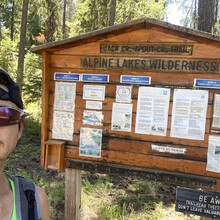 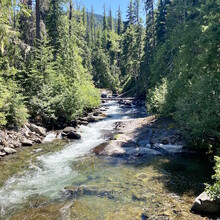 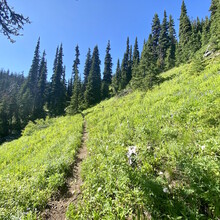 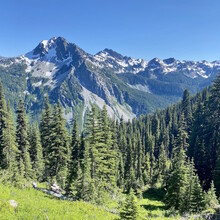 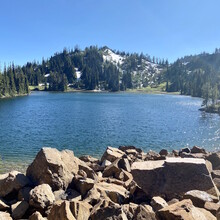 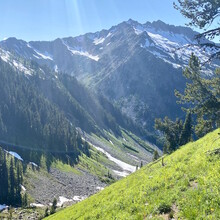 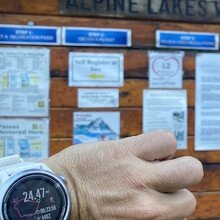 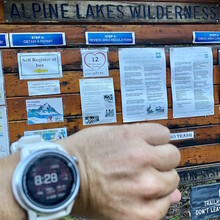 I started the loop from Jack Cr. Trout Cr. TH at 1:53pm ( I like to sleep late and run when it's hot ). I traveled the loop clockwise on Jack Creek to Meadow Creek to Snowall Cradle to French Creek to Icicle Creek and finished at the Jack Cr TH at 8:27 PM. I went solo and unsupported carrying some Spring Energy, a Cliff Bar and about 2L water. I actually had water left over after and didn't fill any from the numerous creek spots. You could actually do this route minimalist with just a single water flask and have virtually unlimited water spots.

There was no snow on the route but the trail is grossly overgrown and has not been cut back at all this year. I used GAIA to make the route in my watch and it was pretty far off the actual trail. The path down from the pass isn't a blazing fast downhill. It's steep and overgrown and my time wasn't any faster down than it was climbing up. But it's beautiful right now if you don't mind stomping around in the grass looking for the path. There may be two trails around the lake but the path to the north seems to be the dominate one.

**I had difficulty finding the turn off for Snowall Cradle Tr. The maps were wrong and it's actually farther up Meadow Creek than you'd expect, as it doubles back to the east and then climbs. Just keep going on Meadow Creek and it will T into the turn off and very easy then. **

This was a beautiful loop and my legs didn't seem fatigued at all despite a 26 mile FKT the day prior. It was a warm day but the dense forest provides shade for nearly the entirety of the route. There are 4 deep creek crossing to pass through. Just bag your phone and don't step on the mossy rocks. I really thought I would finish in the low 5 hour range with a conservative effort. My route came up 2 miles longer than I planned and the descent wasn't nearly as fast as I thought it would be. I was really pushing the last hour and then I miss the dirt road to the TH I parked at. A quick correction and I slipped in with just 4 minutes to spare.