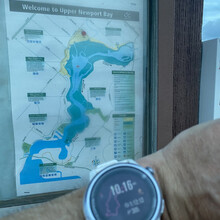 I completed the 10 mile loop unsupported running clockwise from the Upper Newport Bay Nature Preserve. Completed in 1:12:12. This is the high point of the route and begins with a fast decline down to bay level and holds flat until you reach a small uphill over the bridge at mi 6 and then around Mariner's Mile. It it a paved bike path and very wide. The Northern/Western portion of the path after the Newport Bay bridge the alternates on sidewalks and path.

**Of special note: If running CW, the path sneaks off to the right just after turning onto Mariner's mile. It is a smaller blacktop path that moves uphill. Then, you will need to stay right along the loop at the top to stay on the official Back Bay Loop trail.

Another good parking area and starting point could be at Mariner's Park at the corner of Dover and Irvine.

I followed the route given by the photo in the original route post and it also coincides with maps at THs along the way. There are many deviations using other paths and streets, but I believe I followed the official route.

I created a route to mimic the photo provided, You can use this as a guide or my .gpx of my activity