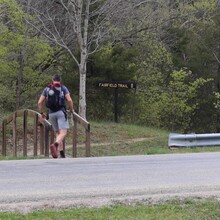 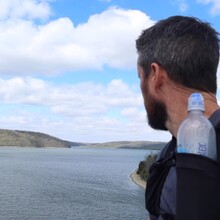 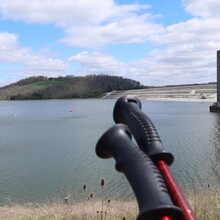 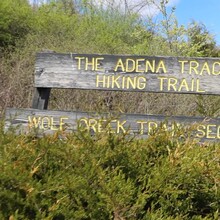 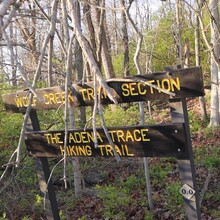 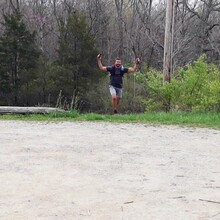 On Thursday April 15 I set out for a training run on the 25.5 mile Adena Trace Loop that circumnavigates the Southern section of Brookville Lake between the causeway in the North to the dam in the South. It is comprised of many smaller trail sections to form the loop so it often has other names along its path. I packed my Pa’lante Joey pack with 12 lbs ready for an overnighter along the trail and set off at approximately 12:05pm.  Part of me was thinking of going for the FKT so I started my Gaia and Strava apps just in case I was feeling strong.  I carried the full pack with snacks, food and camping gear the entire way and by mile 7 I was feeling really good and wishing I had only brought snacks, electrolytes, gels and my filter but it was too late to restart so I carried on.  I averaged 4.7 mph throughout the first 15 miles mostly on the East side where the jogging was very easy with very little vertical gain.  The final 11 miles was much more technical and had more vertical gain so my pace really begin to slow with my average mph pace falling all the way to 4.3 mph, but I knew as long as I kept that above 4.1 mph I could get the new FKT.  The final 5 miles were really tough for me and the 12 lb pack I was hauling felt like 20 but I pushed through the pain and was able to finish approximately 20 minutes ahead of the current FKT.  I may just have to go back and try it again this fall with only a few lbs on me rather than a full backpacking kit…I would like to think that I could get my time below five and half hours pretty easily.  However, I’m sure its just a matter of time before some ultrarunner comes out an puts down a solid time under 5 hours which I’m sure could easily be done.  It was a beautiful area and I’m glad I got the chance to give it a shot before other more experienced runners have a go at it.  A special thanks to Steven Liss for establishing the first FKT on this trail and giving me a challenge to go after. I recorded a video for my YouTube channel and will add it after getting it published.