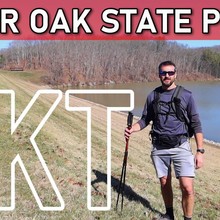 Three and a half years ago I went on my very first solo backpacking trip at Burr Oak State Park and it took me 2.5 days to complete the 21.2 mile loop that circumnavigates Burr Oak Lake in Glouster Ohio.
For the past year I have been wanting to return to Burr Oak and try to complete the loop in one half day. After recently setting the new self-supported FKT on the 333 mile Sheltowee Trace in Kentucky back in November of 2019, I was looking for smaller trail to train on and when I realized that no one has ever established an FKT at Burr Oak I figured I would do it.
My goal was to try an maintain a 5 mph hour average pace or approximately 12 minutes per mile. So with numerous energy gels and several cliff bars and 6 liters of water I hit the trail jogging at 10:45 am. With this pace I would finish in under 5 hours, which was my goal.
At the 5k I was at 36 minutes and at the 10k I was at 1 hr and 15 minutes, which was still on my pace I had set for myself. I was jogging approximately 75% of the time. By mile 11, the half way point, I was beginning to fall off pace a little, 2 hrs 20 min, due to the muddy/slippery trail conditions and from just wearing down some. My average speed had slowed to 4.7 mph but I was still on pace to break my 5 hour goal I had set as long as I could continue to maintain my pace.
By mile 15 I was getting really tired and regretting not eating a bigger breakfast. I was now walking at least 50% of the time. I was continuing to fall off pace and getting really tired and unfortunately this was where most of the hills were.
With one mile left, my five hour goal had come and gone. I was so ready to be done and now realizing that I had not trained enough for running this distance. My average speed had dropped all the way to 4.1 mph, which is my normal walking speed when backpack training. I pushed through the pain and exhaustion and was able to complete the circumnavigation of Burr Oak lake in 5hrs, 18 min, and 51 seconds.
There is a marathon held on this trail each November called the Bobcat Marathon, that has many runners completing this trail much faster than I did, however, there are over four miles added to the trail to make it a full marathon.