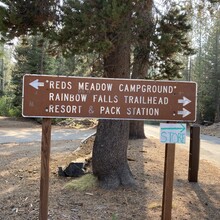 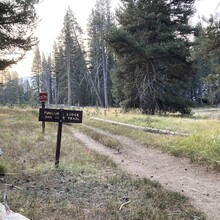 After being thwarted on two other attempts due to wildfire smoke, I got to tackle this FKT. I started at 7:08am from the Tuolumne Meadows Wilderness building at the sign for the JMT trailhead (shown in photo. Also shown is a photo at the route finish-- the campground entrance at Reds Meadows). It was 33 degrees, much colder than expected. A fair amount of smoke clogged the skies from the new fire burning in Kings Canyon. This slowed my pace considerably more than I anticipated. I opted to take it slow and take care of the lungs for future adventures. I filtered water from several of the lakes, which are abundant on this route, the first re-fill coming at a creek crossing mid-way up Donahue Pass. I made a brief pause at Thousand Island Lake to take advantage of good cell signal to text my girlfriend that all was going fine. By now, the temps were near 80 and the skies were still very smoky. But it was a gorgeous day nonetheless. The lower portion of the trail, from Thousand Island lake to Reds Meadow had more small hills than I anticipated even though I studied the course. In particular, the couple miles before Reds Meadow provided an unexpected grind! This is a beautiful run through the Yosemite high country. Highly recommended.