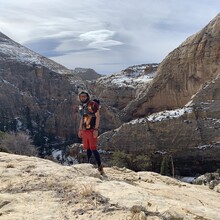 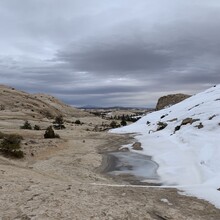 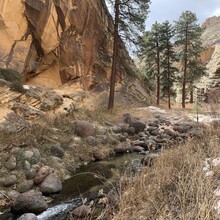 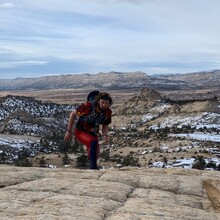 The route held snow, just enough to make it fun, challenging, and a slip and slide on the right (or wrong) aspect slopes. It was true winter conditions, but with the temperatures warming to slightly above freezing I did not need traction beyond the nice amount of tread on my voluptuous HOKAs. I started just before 8:30 am without much idea how long it would take. Two days prior I had done the out and back variation from the Boulder side, with half of it being in the dark. It was more to train for the difficult night miles at the Barkley Marathons than anything, but we can call it a scouting mission.

Knowing the snowy condition of the trail and the obscured cairns that marked it, I had a goal of breaking ten hours. Within the first few miles, I knew I would be well below my arbitrary goal. From the Escalante side up and across Antelope Flats I felt good. It was one of the rare times I consumed the perfect amount for breakfast before an effort. It was a beautiful drop down to the river and then a nice refreshing climb up the other side. There was no sign of anyone until I was within a mile of the Boulder trailhead. There I passed a woman walking her dog, pulled my buff over my nose and mouth to be courteous, said a quick hello, and ran to the trailhead. Without even a moment of rest, I turned around and passed her again a few minutes later. I can only imagine what she was thinking. The way back toward Escalante actually felt easier despite being miles 15 to 31. There is quite a bit more descent in this direction and I began to wonder what kind of time I could have posted one direction if I had started on the opposite side. I wanted to break eight hours, but it just wasn't in the cards with the slower first half. I couldn't ascend the snowy climbs headed south fast enough and my route-finding left some to be desired. Either way, it was a fun way to knock out 30 miles in one of the most underrated places in the country.

Other notes: First half time: 4:16:22 Second half time: 4:11:13 I brought a liter of water and filtered each time I passed the river and topped it off within five miles of the finish with some snowmelt. With the winter season, I hope this FKT simply shows another way to do some of these routes, especially in the Covid age of self-sufficiency and social distancing. I do not like car shuttles and am always into trying to out and back a route for the sake of arriving back at my car.

Awesome to see this awesome trail get some attention!  Love that you Out and Back'ed it! I used a bicycle stash to do this as a duathlon loop (since the hwy between the two trailheads is one of the most beautiful stretches of hwy in the USA).