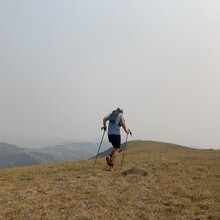 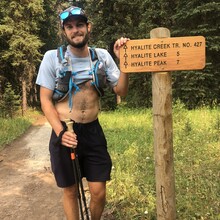 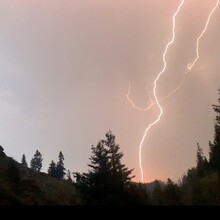 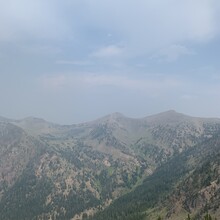 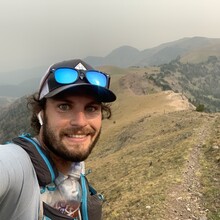 It was not the perfect day, but it was the only day. I woke up at the Buffalo Horn Trailhead at 5am, but sat in the truck with the heater running until almost 6am. Thunderstorms crashed overhead, and with almost 30 miles of this route being on the crest of the Gallatin Mountain Range, I didn't feel comfortable starting until I could tell which direction the clouds were moving and that the weather behind them was safe. Eventually the clouds began to move out from over the top of the trailhead and I decided to go for it. I added a layer, a better rain jacket, and a GPS tracker to my bag along with another handful of food just in case I needed to sit out a storm in a valley for a few hours. Then I went for it just after 6am.

It was a tough jog through dense mud up to Ramshorn Lake. My feet weighed an extra pound each and every step was a slide. I followed the storms up to the lake, and as if the gods saw me coming, they disappeared the moment I decided to climb up on the ridge. I was lucky! Goats dotted the incredible landscape and water was a little easier to find than my last time on the GCT after the recent downpour. It was a hazy day but a beautiful on. I was right on the route until I inadvertedly followed a goat track around the side of Hyalite Peak. Knowing this is one of the iconic features of the route, I stopped and backtracked to tag the peak before descending the monotonous and muddy trail. Half a mile from the end I made another wrong turn and ended up on Grotto Falls. Costing only a couple minutes but prolonging my desire to finish, I made it to the trailhead where my girlfriend was waiting with a Gatorade, beer, and a ride home. It was an awesome day in the mountains. Plenty of time to gain on the route, but with goat tracks, unused and overgrown trail, and unmapped trail intersections, the route is best scouted first. One of my favorite projects I have done since moving to Montana.