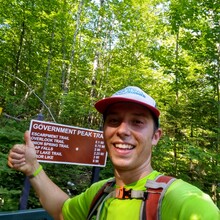 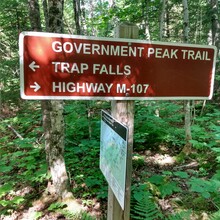 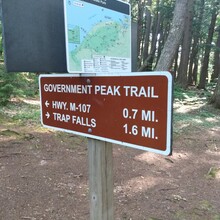 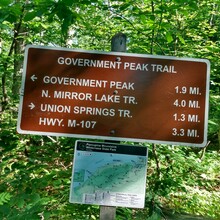 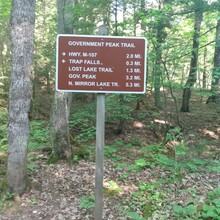 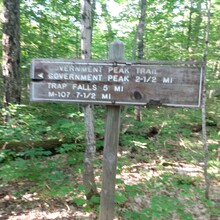 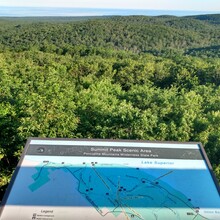 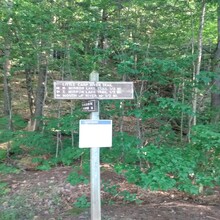 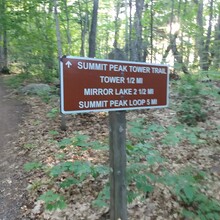 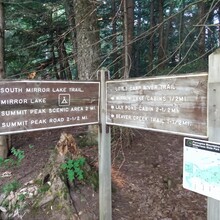 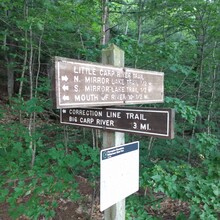 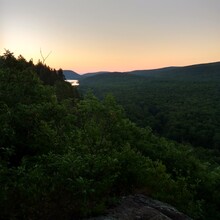 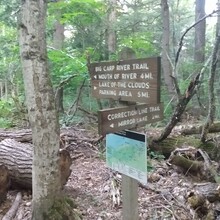 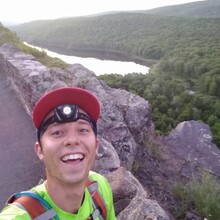 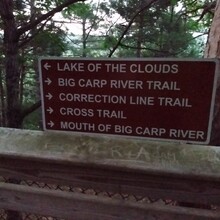 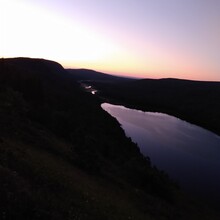 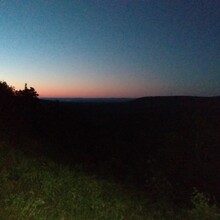 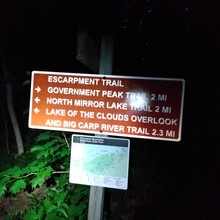 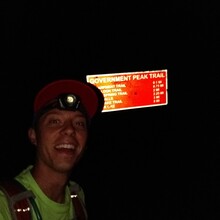 Got to trailhead when I wanted to and felt good. Drank 2 Ls of water  night before to make sure I was hydrated. Decided to start from encarpment trail trailhead as opposed to Lake of Clouds so that I could help pace off of Randy's splits. I was quite impressed by Randy's 5:32, and wrote down some noteable landmarks and used Randy's Strava to pull his splits.

Headed up towards Cayuga peak and forgot from the last time I was here how steep that climb is. Used headlamp in woods but it was cool to see from the outlooks the color of lake of the clouds slowly come into view as sun came up. Between headlamp and more technical trails, (as well as multiple photo opps) I ran this a little more slowly. Took a snapshot at the LOC overlook. Two years ago on a presunrise run I saw a baby bear on this section of the trail 20 yards ahead around a corner and I snuck back around the corner so luckily he and/or mama-bear didn't see me, but no luck on seeing any bears this morning.

After Lake of the Clouds I was in uncharted territory. I had run and/or hiked the whole escarpment trail 2 years ago, but that and Summit peak trail from the parking lot were all i had actually been on of this loop prior to the run today , so it was nice to be running the ridges and seeing the color of the sunrise from behind the ridges to the east showing up. This was all new territory for me and I enjoyed hitting these sections. There was another mile or two of ridge before dropping down into some old growth forest. I tried to hit this a little faster as there was some gentle downhill for a while. At LOC I was behind Randy's split by about 5min, and even at Little Carp/Correction trail I was still about 5min behind Randy's split.

Heading up the correction trail I started hitting significantly more mud. There were definitely some spots where my shoe almost pulled off. At this point I was trying to make up some time and was feeling overall pretty good. I knew I was going to have to get water somewhere in the mirror lake loop on the route, as I was going to be getting low somewhere in there.

Around mirror lake mosquitos became atrocious, but that was only a problem when I stopped fully to pee or to take a look at a trail intersection. A lot of these sections were way less techincal and runnable, so I tried to open it up and hit these a little faster. Summit peak was cool to have all to myself around 7:50am. No one else was there. Last time I was here I remebered the observation tower being taller. After climbing to the top of the mountain I was glad the tower was only a few flights of stairs. Pretty view and saw the sun rise even further. Tired to open it up again after the peak to make up some time on Randy's split.

When I got back to mirror lake I was pretty excited  I saw activity around the two cabins, I think they were the first people awake I saw that day- said hi to the people staying in them. Right after the 2nd cabin there was a small stream with clear flowing water. I decided to fill up here as I was down to about 500mL between my bottle and hydration bladder. On previous long runs from the past in the backcountry I had gotten really bad heartburn from injesting multiple liters of water treated with iodine tablets. Decided to take my chances and drink without treating it (makes me think it might be nice to invest in one of those bottles that filters while you drink it). When I had squatted  down to get water my left leg almost cramped up. I had started to notice it feeling a little worn around summit peak but repositioned it and it luckily went away.  Water tasted good and went on my way.

Government peak trail was definetly less traveled then the other trails in the park and I could understand why, with less access to the middle of the trail where I was, there were more trees fallen on the trail and I could tell less people hiked it and it had seen less trail cleaning (also more muddy sections). As I approached gov peak my left leg ham and quad were starting to feel temperamental. I tried to start drinking my gatorade to see if the electrolytes would help, and hoped it wouldn't lock up on me. Started feeling worn down at this point, but was hoping to keep moving and see if I could get ahead of Randy's split.

Gov peak climb was definitely steep, I had to walk some of it, started seeing more people out hiking and it was nice to say hello. When I got to the top said hello to 2 guys and their dog. Kind of spooked the dog as I came out of no where to him I imagine. Here I was close to Randy's split.

Heading down gov peak the end started to feel in sight. Tried to continue to make up some time on the more runnable stuff. Finally the leg stopped bugging me so much and I felt like I might have a chance at getting the FKT.

When I turned onto lost lake trail I was 2 minutes ahead of Randy's split. I ate the last of the food I planned to and figured now I would just focus on running as fast as I could, and I felt great too. Luckily the crampiness subsided and I was just running fast and feeling good. I figured by the time I got to the overlook trail, I would hit that with any more juice I had left, and maybe even drop the time to closer to 5 hrs. By the time I hit that intersection, I was 7min ahead of Randy's split. I had hit this last section pretty fast and couldn't wait to hit the overlook trail with all the juice I had left and be done sooner than I expected

The overlook trail was the most technical, rocky, rooty, and least traveled trail I'd been on in the park. Tall big climbs and then the decent to the end was exceptionally steep. I literally walked about half of it because it was so techincal. Not runnable at all and nearly impossible to get heart rate up as every step was a broken ankle waiting to happen.Finally I got to the trail intersection and headed down the final quarter mile or so back to the car.

Was excited to get the FKT at 5hrs 20 minutes. It was super cool to explore that much of the park, and I imagine the 4-5 times I made a small wrong turn and had to backtrack tacked on enough extra mileage to have it count as a trail marathon. I was lucky the black flies were not too bad the day I was out, just mosquito heavy in a few spots. Very fun and cool loop!