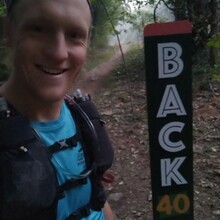 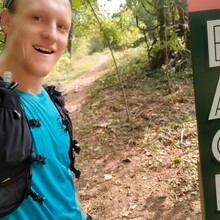 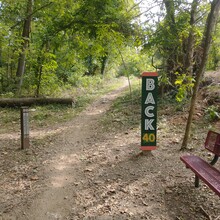 Wasn't really planning to make an attempt on this quite yet, but saw that the weather was going to be favorable and I was didn't want someone else to beat me to it and make the job even harder (again), so decided the night before that I'd go for it the next morning.

Woke up later than expected, then struggled to find the best access point to start the loop with the nearby construction. After nearly half an hour of recon, I landed on a dirt pull-off outside the park that had a spur I could walk down to the starting point. All that to say, I lost a lot of time getting going, but it worked out for the better, because the early morning fog really decreased visibility so much that I ended up having to wait until much closer to sunrise anyway.

I hadn't set foot on the Back 40 system at all until I did the loop, so I wasn't sure what to expect. I had done some research about elevation, but I didn't know how technical it would be...my goal was just to keep moving. I felt if I did that, I could get around in record time!

First few miles felt a bit shaky as I warmed up and settled in, but then I was able to cruise for a good while. The first climb was barely noticeable since my legs were fresh. The second one has a little bite to it, but it was over before I knew it. The third one slowed me down some, but still nothing major. It climbed up to the highest point on the loop, so once I was done with it, I was feeling good...though the amount of elevation change remaining was a bit concerning.

From there, began a slow descent down with a few short, steep climbs mixed in. Those two humbled me, for sure. This was the low point of the run. I was fading and had to change up my nutrition strategy to get some more life. I was thankful when these climbs were over and I began the long run down into the lowest valley on the loop. This descent was hectic in the best of ways. I was able to keep my speed up and cover a lot of ground and finally cross halfway on the elevation-climbed (long after hitting half-way on distance).

This long run down was a ton of fun and a big morale and pace boost, but now I had to climb back up to my starting elevation. From this valley, three were three notable climbs left in short succession. The first one wasn't terrible, but it did concern me that the remaining two might take me down. The backside of that one was a good, fun recovery and led me nicely into the second climb. This was a beast. I don't know if it was actually harder than the others, or if I was just tired, but I struggled. I was keeping close eye on the distance remaining to keep me motivated. Watching that number decrease kept me in it. At the top of this second-to-last climb, it showed only a few miles left. I was surprised there could even be another climb in the mix, but my watch showed a rather steep one coming.

I was pleasantly surprised when the valley between the final two climbs wasn't as drastic as I feared, so I really didn't have much elevation ground left. I was able to push myself hard up the last climb, encouraged by the dwindling distance left. At the top, I slowed my pace for a little, checked where I was at, then hit the final descent hard to try to get in under 3:45:00. This last bit was beautiful running -- fast, but technical and just a lovely forest!

I sucked down the last drops of my water as I started seeing familiar sights. I kicked as hard as I could and ran it out hard for the last half mile. DONE!

(Unsupported and no one else with me -- I brought several jells, a couple packs of sport jelly beans, three liters of water, and a shot of concentrated gatorade in my hydration vest.)