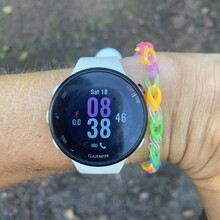 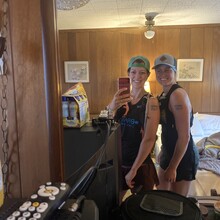 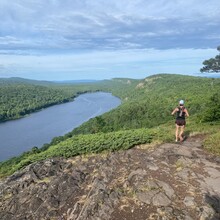 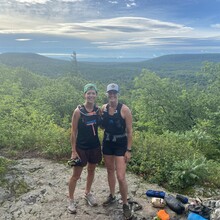 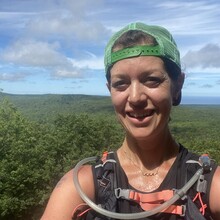 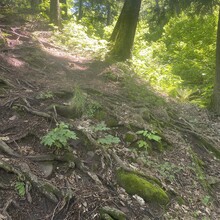 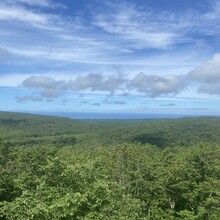 We had initially planned on getting started on the trail around 5 am. Unfortunately, due to severe thunderstorms, our start time was pushed back. We started a little after 8:30 am at the Escarpment/Government trailhead. It was hot and very humid! After the first mile climb, I was already soaked in sweat. I ran with my friend, Ally, for approximately the first half. We would run on the parts that we could and walk fast up the steep accents. My favorite part was the Big Carp River Trail where the large trees and moss made you feel like you were by the northeast coast. It was also very shaded there which helped escape some of the heat. Ally's knee (previously had surgery on) started to give her issues so she opted out at the Summit Peak trailhead (smart move). I continued on my way and worked my way up the Summit Peak Trail to the top of the lookout tower. There was an elderly couple up there that thought I was an insane person when I told them about the FKT and that climbing the tower was part of it :) My knees started getting pretty sore on the descent but felt fine when running the flat(ish) trails on N Mirror Lake Trail. Government Trail was the hardest for me mentally. I started to get pretty lightheaded around mile 19/20 which may have been from nailing my head on a low tree branch on the previous mile or from lack of nutrition. Feeling lightheaded I also started to get a bit panicky as I hadn't seen anybody on the trail for the last few miles and was contemplating how long it would be till I was found if I passed out :o After walking for a bit and getting in some more chews, water and working on my breathing/mindset, I was able to overcome the anxiety and started running again. Once I was by the river and waterfall, I was feeling great. I stopped to dip my head in the cold water to cool down. Legs sore but knew I could finish it...that was until I started the dreaded Overlook Loop. Thank you, Joe & Allison, for throwing in that "treat" ;) I mostly had to walk the whole loop as the climb was intense and I didn't trust my legs on the steep descent. Neil and Ally were waiting for me at the end which was the best part! I surprisingly ended without anything broken or bleeding. Side note, I wore a Nathan waterpack and also carried a handheld water bottle with electrolytes. I did not need to stop for water anywhere.