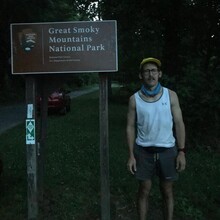 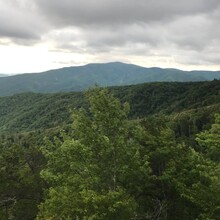 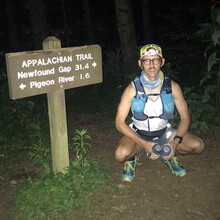 The alarm went off at 3:50 AM and weirdly I didn’t hit snooze. I ate breakfast, readied my hydration vest, filled bottles and looked over my run plan once again. I then re-read John Kelly's trip report from his unsupported S.C.A.R FKT. Felt pretty excited but nervous about my water plan, as I hadn’t ever been on that section of the AT and didn’t know what to expect.  I decided I wanted to start without a headlamp so I waited until 6 AM to begin. I got my obligatory photo at the Davenport Gap trail sign, started out easy and ran most of the ups with some power hiking on steeper sections. Early on the weather was spectacular - partly cloudy, some fog, a little humidity and 55 to 60 degrees with the sun creeping out occasionally. I told myself that I would push the flats and downhills from the start. Perhaps I was a little reckless on the downhills as I almost rolled my left and right ankles in the first 8 miles. This made me slow down a bit as I had rolled my ankle pretty badly the weekend before while running with Coree Woltering during his Ice Age Trail FKT attempt.

My plan had me stopping for water at Cosby Knob Shelter, Tri-Corner Knob shelter and Icewater before I crossed Newfound Gap. My water set up included two 18oz handhelds and two 20oz flasks in the back of my vest. I drank from both Cosby and Tri relatively quickly and made good time at both shelters. Within the first 20 miles my phone had somehow switched out of airplane mode and completely exhausted its battery, so I turned it off for the rest of the run, removing any possibility of any additional photos. However, it didn’t matter as the fog was SO intense you couldn’t see too far into the distance to take any pictures! Icewater was close to 13 miles away from Tri-corner and I ran out of water between the two. I filled up water at Icewater, drank one flask and then refilled before leaving. Made it to Newfound Gap (30 miles) around 6 hours and felt pretty solid but that feeling would soon quickly dissipate.

Not sure if I was dehydrated, I was feeling the altitude or I started too quickly, but every step after Newfound Gap took a concerted effort. I felt as if I could lay on the trail and take a nap. I had no energy and was constantly yawning. I tried to make sure to eat more during this section but even eating made me feel awful. I drank a tailwind and ate a non-caffeinated spring energy speed nut and struggled my way to Clingman’s, clipping off 15 min miles. Once I got to Clingman’s, I decided not to go to the summit and simply continue along the AT. I was, again, running low on water and perhaps being tired played into me forgetting part of my plan and skipping some of the water stops. I think I went 15 or so miles without water and was already dehydrated. I remember thinking about filtering water out of trail puddles as I had brought a small MSR hand pump. It had been extremely foggy with rain off and on all day. This made me think more about finding water but it also made the roots and rocks more slippery which further increased the difficulty of the section between Clingman’s and the end and significantly slowed me down.

I believe I stopped for water at Double Spring Gap and Spence field between Clingman’s and the finish. I couldn’t find water at Derrick’s and I must’ve ran right by Mollies because I don’t remember seeing it until I saw the sign that said Mollies was 3.7 behind me. I had been filling up 2 of the 4 water bottles and had resorted to carrying them as handhelds because I was tired of carrying them in the pack as the weight was mentally/physically getting to me. Saw a wild boar near Derrick Knob, it was pretty close to me as I had been yelling “hey bear” for most of the trail and happened to yell that which I think scared the boar.

At some point in the last 20 miles I had quit looking at my watch and tried to keep a rhythm of running. My uphill legs were pretty beat but I could still jog uphill for short periods. The last 15 miles I decided to go for it and really made a concentrated effort to push the downs. I had purposefully saved all my caffeinated food for the last section, which helped me put in a focused effort. The wet roots and rocks made this more sketchy. Next thing I know I saw a sign for Fontana Dam that was within 7 miles and knew that I just needed to maintain my pace and I’d finish in a good time. I was finding it difficult to move efficiently even on small uphills at the end but still had some flat and down hill legs.  Valerie and my brother-in-law Keegan were at the end of the trail waiting. I got to run the last trail section with my dog Buck and Poppy, Keegan’s pooch. Forgot which place to stop so I ended up running past the sign and across the Dam to the visitor’s center. Then I went back across the  dam and got my obligatory photo with the GSNP sign.

My final time was 15:06, which I believe is a new unsupported FKT for the route. Really cool, burly, beautiful route across Great Smoky Mountain National Park.  I am very happy with the effort I put into the training leading up to this run and the run itself. It was interesting to see afterwards that my moving time was 14 hours 15 mins, which makes me think if I hit all the water stops and had been quicker in those transitions it could potentially be a lower time.  I could not have done it without the support of my wife Valerie. She put up with my big training weeks preceding this run and always supports my crazy ideas. The SCAR facebook group was a huge source of knowledge and really helped me plan my run.