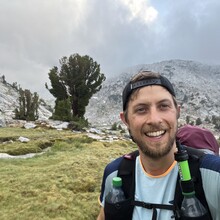 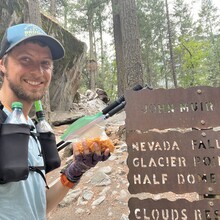 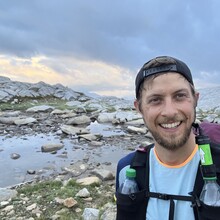 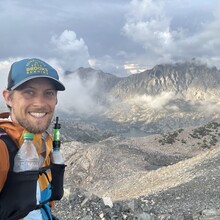 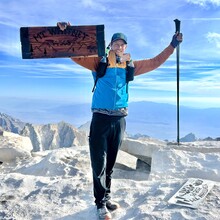 First off, major kudos to everyone every who has done the John Muir/Nüümü Poyo Trail. Wow. What an experience! I've had the JMT on my radar since 2014 when I did the majority of the trail as part of a PCT FKT. I remember meeting Andy Bentz in Washington on his PCT thru hike. Later that summer, he would come back to the JMT and smash the unsupported FKT. He helped me realize what was possible. Since then, I've had a long endurance journey knowing that eventually I'd want to come back to the JMT. I thru hiked it with my wife in 2020 and have been waiting for the right opportunity.

Since 2014, I've seen records fall from Aurelien, Francois, Darcy and others. Man, that's inspiring. I remember thinking that under 3 days 10 hours is crazy.

Well, this summer I finally had the stars align to give it my shot. I was guiding backpacking trips in the Sierras for 15 days and would have a few days at the end to tack on an extra adventure. I had so much fun doing this FKT and feel really grateful for the opportunity.

I started at 10:00 AM on 8/1 and immediately ran into my friend Josh and his two sons Cooper and Jacoby who had just finished a JMT thru hike. So, I walked back down to the trailhead and started over again at 10:05 AM.

Day one went quite smooth. I was shocked at how good of time I made coming into Tuolumne Meadows, through Lyell and over Donahue. I felt sleep deprivation early, possibly from altitude, but that felt odd. I took a nap, felt like it didn't help much, and took two more over the next few hours. I covered about 65 mi in the first 18 hours.

Day two was the day that worried me. Horrible storms were hitting the Sierras and Muir Pass was predicting .5 inches in 6 hours. That would make any FKT attempt seem almost impossible. While I got hit with some rain, I avoided the major storms and serious lightening. I continued to focus on eating and made it to about 137 mi in 42 hours. At this point, I thought I had a long shot of beating Francois' time, but felt like I had a good lead on Aurelian. Again, I hit some serious sleep deprivation and needed three naps to power through that night.

Day three involved mostly gutting it out. With the record in reach, I was able to sustain pretty good energy levels for the day. I had my work cut out in front of me. I'd need to go over Mather, Pinchot, Glen, Forrester and Mt. Whitney in 24 hours. Woof! But the climbs were long and steady and I again focused on nutrition and consistency. I hit some weather around Glen but seemed to miss the worst of it. Forrester was slow, Whitney was slow, but I loved every moment of it. There is some magic to doing big mountains and mountain passes at night. Coming off Whitney, I had a pretty big cushion to get to Whitney Portal. I hit an 8:30 mile in my final mile zooming into Whitney Portal. I met two lovely hikers, Wildflower and Randy, who bought me a burger and drove me to Mammoth. Within 30 minutes of finishing, the floodgates opened up and I found out later that they closed Whitney Portal Road that day! Talk about threading the needle.

I've posted a few videos on Instagram and will have a longer trip report on my website thestringbean.co.

Sleep: I slept approx. a total of 265 min or 4:20. My strategy going in was to sleep one to two times of 10-20 min naps per day for a total of ~1:30, so obviously I slept a lot more than I expected. As early as 15 hours in, I'd experience some cognitive issues. My vision would get blurry or lack focus, my brain would have a hard time staying focused. It became very hard to make good time. If I let this progress, my eyes would droop, I had some mild hallucinations, and I had minor out-of-body experiences. When this started happening, I had a difficult time running and my moving pace generally slowed down by a few minutes per mile. Additionally, I became very slow and quickly fatigued on climbs.

Acute Fatigue: There were some obvious signs of fatigue that built up over the effort. In the first 20 miles, I averaged 17 min/mi with a full pack while climbing 6k of vertical gain. I then averaged a lot of sub 15-min miles from 20-31 on flat terrain. My moving pace slowed over the course of the effort. As I progressed, I noticed that my uphill pace suffered more compared to my flat pace. On Mt. Whitney, I think I was experiencing some AMS as I needed a 36 and 40 min mi going uphill which was more than twice as slow as similar climbing paces in the first half of the effort. I moderate hiking pace would leave me gassed and requiring a rest break. On the downhills, I was certainly less agile and slower, however I didn't experience the same kind of fatigue. Remember, I probably had 5-10lb less of packweight at this time. Overall, my body held up extremely well from an injury perspective. A few aches and pains and foot hotspots. Mild tightness in my left hamstring and right quad, but no serious muscular or tendon/ligament issues.

Backpack weight: My packweight started around 15lb and ended around 6-8lb. I started with around 15k of food, 5lb of gear and 3lb of water.