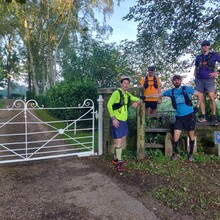 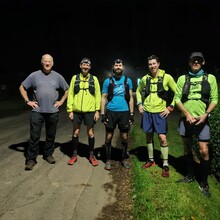 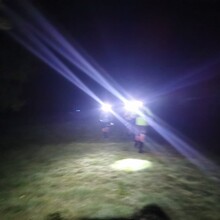 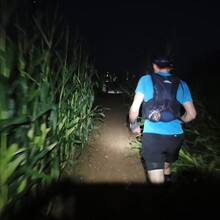 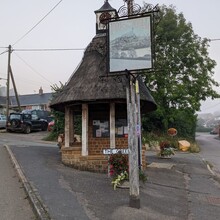 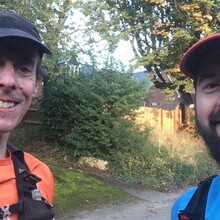 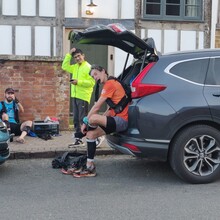 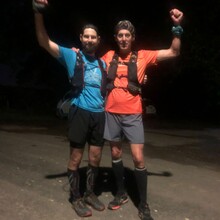 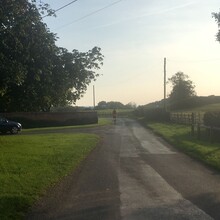 At 4:05 am, Martin, Chis, Tom and I (Joel) left Marston Trussell, heading south. Martin acted as tour guide as he had recced the trail already. We had a stellar crew or friends and family who supported the entire run, making it such a treat, coupled with the excellent October summer weather. In short order we arrived at West Haddon with a half marathon in the bag at about the 2 hour point.

Freshly topped we headed East into a gorgeous sunrise fighting its way through the autumn mist. The morning miles flew by and before we knew it, we were at Draughton, filling our bottles and faces, having completed 26 miles.

From this point on, our checkpoints were closer together which was a definite enabler all along the way. We hit Braybrooke then rolled up to Stoke Albany. We convinced Martin to push on as he was feeling the wear at this stage. We were about half-way around at this point.

Pushing forward, we climbed our way over to Hallaton, the office start/finish for the trail. This is also where this trail crosses the Leicestershire Round, so felt like familiar territory to all of us.

By this time things were warming up a bit. Sadly, we said goodbye to Martin as he was unable to continue. I'm sure he saved us a mile or two with his knowledge of the trail. With only 26 miles left, we headed further North to Tugby, Rolleston and the to our next CP at Billesdon. Chris and I bid farewell to Tom as he could not sustain anymore without injury. My young son joined Neil on the Crew. After this bittersweet exchange, Chris and I pushed on into the northern crest of the route, past Ingarsby and down into Houghton on the Hill for our next CP.

This was familiar territory for me as I had plenty of miles in these parts over the last year. We descended into Gaulby and King's Norton as the sun dropped towards the west, glistening off the fields garnished with silken spider webs. Before long we came to Burton Overy where we nearly missed a turn. Chris and I were feeling the distance but were able to maintain pace and keep the momentum. We arrived in Kibworth Beauchamp where we had our final top ups.

Moving on into the early evening, the first few steps from the CP were really heavy and took some time to get moving again. I had a shot of cold coffee and this kicked in about 20 minutes later. Before long after being chased around a field by a farm dog, we dropped onto the canal and climbed up Foxton locks. We missed our last CP, but ploughed on as we only had a further 5 km to go. It got dark along the canal, and fortunately I had a dimming headtorch for us both to share on the final stretch. I looked down at my watch after crossing a field and couldn't believe it. We had just 300m to go. Chris and I hit the road and we sprinted to finish the epic journey.