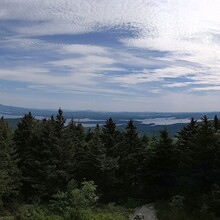 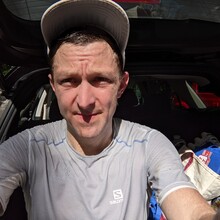 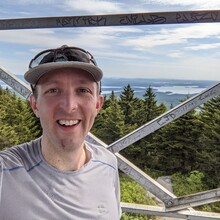 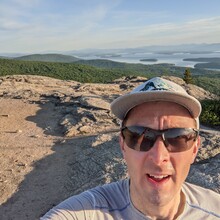 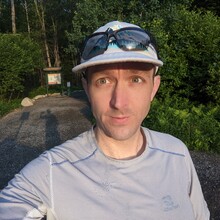 I got a later than intended start at around 5:50 am; I had hoped to start earlier to get a bit more time with nice cool temperatures in the 50s.

I took the climb up Mt Major decently hard as a bit of a warmup, and wanting to bank a few minutes on the previous fastest time, which seems to have been by Jesse Ross: https://www.strava.com/activities/3348124994/overview
I knew that I'd soon be hemorrhage time due to unfamiliarity with the network of trails and many intersections in this part of the route.
That turned out to be exactly what happened, as I moved well for a short time, then had to slow a little to pull out my phone and check that I hadn't missed a turn, or to check a direction at a turn.
I missed at least two turns, and didn't cut a switchback that Bill Tidd did. My goal was to hold roughly even with the previous FKT here while keeping up on nutrition and hydration.
A little stream on my way to Anna let me grab about half a BeFree of bonus fluids, which was good as the day warmed up more quickly than I might have liked.

I passed few others out on the trail until a large Boyscout group at Round Pond. The water in the pond was foul, filled with algae, so after a few diversions to look for good access, I skipped getting water at the pond, remembering a stream on the map on the way to the base of Gunstock resort, which I used to fill my BeFree and carry on my way quickly.
Despite Bill Tidd's warnings, I didn't have any trouble with navigation down to Gusntock. The trails were wider and more open, and thus much faster. The sequence of trails seemed fairly logical to me dumping mostly into steadily larger trails until I hit a gravel road and opened up my stride a little. Despite a spring filled with injuries and cycling instead of running, my running stride still felt strong and smooth.
I hoped to find a tap at Gunstock resort that would count as publicly available, permanent infrastructure that could still be used in an unsupported FKT, but didn't see any, so filled from the little holding pond at the base of the lifts. I filled two flasks and my BeFree to get me through the rest of the route.
After bumbling around a bit, I figured out that the route really does go straight up the access road. I had done a good job managing effort and fueling and felt good, so I kept a steady climb and soon got back onto some single track on the white blaze trail.
I hoped that navigation would be easy - white blazes on a ridge trail from here out... but that's not quite how it was. Navigation was significantly easier than on the first 1/3 of the route, but still not trivial, with several intersections with signage that is not easy to read at a run. I missed the cut off trail to the ski slopes going up Gunstock which probably added about 0.25 mi to my route compared with Bill Tidd, and some slightly techier terrain.
After I was over Piper. navigation was no longer an issue at all, and I started to run harder. I kept a fairly honest pace up Whiteface, then let it rip coming down to the end. When I got to the road, I couldn't quite see the parking, and bumbled with my phone for 20ish seconds before I figured out which way to go. I stopped my watch in roughly the middle of the parking lot, where my wife's car was waiting to pick me up.

This was a nice way to get a real tour of the Belknaps. I understand that there are actually some waterfalls out there that I didn't get to see (maybe some don't even have trails!), but it was a fun day of mountain running which featured quite a bit of lovely blueberry meadows and slabby exposed rock, which is really surprising given the low elevations of the mountains. Knowing this route now, I'm quite sure a solid 15 minutes of my navigational time will come off easily, another 5 minutes of filtering time can come off to someone with a more dialed approach (and cooler weather). And of course a harder effort and faster person will go faster still. I won't be surprised if this goes down to 3:20 or so in the next few years.

Gear:
I carried two soft flasks with Tailwind, an empty BeFree, and another soft flask with some Tailwind, but no water. For "food", I carried a 6oz flask filled with homemade mocha energy gel, a few fruit strips, a couple of granola bars, and an emergency gel. My phone was preloaded with Bill Tidd's GPS track and map layers for the whole route in Caltopo, and it was in a plastic bag, which helps keep the screen functional even when I'm sweaty and gross. All of this was all stashed in my Naked running belt and the stretchy waist pockets of my Salomon XA shorts. I decided against poles so I could use my hands, which turned out to be even more important than expected as I held my phone in hand for navigation through much of the run from Straightback until heading up the access road at Gunstock.