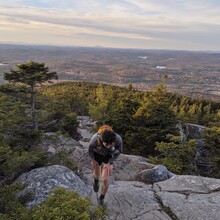 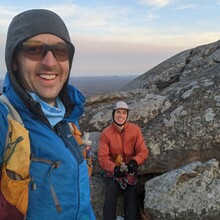 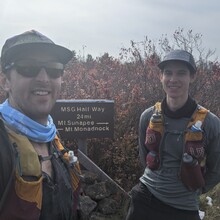 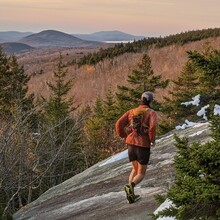 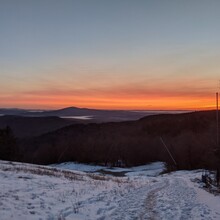 This effort was born from the ashes of several more ambitious plans. Andy MacGibbon reinjured his ankle and couldn't join in the madness, so Saúl and I kept backing off and backing off until we hit on the Monadnock-Sunapee Greenway as a manageable objective. Since I had run it before, it felt like I knew what to expect, and that I hoped Saúl wouldn't totally run me into the ground. I'm glad those other plans fell through - this was a much more appropriate level of suffering. In fact, we did not suffer all that much. Energy levels were mostly high, and neither of us hit any really serious low patches before the end.

The morning dawned with gorgeous views as we hiked up Sunapee. It was cold - below freezing, but barely. It certainly felt warmer than down in town, where we saw temperatures of 28 F on a bank's illuminated sign. By the time we were at the start, Saúl regretted bringing pants. The snow wasn't too bad, but we had to start out running down steep tracked snow that had partially frozen, so we donned spikes. I discovered that only one of my Vargo titanium spikes was functional - I've now managed to break three of them - so I put only one spike on. Only a mile in, we put our traction devices away, having mostly been off snow after leaving the ski slopes.
Naturally, once we passed Lake Solitude, there were far fewer tracks, and we were mostly back in the snow, but kept going without spikes. Saúl slipped a few times, and I slid out on some wet leaves. The conditions were nothing like the drought of the summer and early autumn. But the snow portended melt water, making water access easier and more reliable than when I ran the route with Iain Ridgway last year. Nevertheless, we had each started with 3 liters of fluids, which turned out to be far more than needed.

Red and yellow leaves littered the snow in the early morning light; it was beautiful and we were happy to be out getting in a big effort and enjoying autumn. I followed splits from my effort from the previous year, though Eli Burakian set a faster time since, because that was a pace I had a feeling for.  When we hit roads for the first time, we kept speed in check, but I knew we were running better than I was at the same point last year. We kept eating well, hiking uphills, and running flats and downs. We chatted and cruised. We avoided missing turns thanks to having written out turn by turn directions, and looking frequently at the route in Caltopo. At the half-way point, we were up on my last year's split by over 20 minutes, and without the heat of that day, we were relatively fresh still. Seeing the blueberry fields with bright red leaves, and passing so many pretty lakes were high points, reminding me how lovely the day was and how fortunate we were to be able to get out and spend the day doing something so frivilous, fun, and painful.

Around 50k in, we had a nice sit-down break at a stream and ate "real" food, and made sure we were well hydrated. Once we hit the roads and forest roads of the second half of the route, Saúl really kept us moving. We walked more of the uphill than I had hoped for, but without pushing too hard, he kept the pace honest, and we continued to gain on my splits from 2019. My Katadyn BeFree filter started to really slow down and almost completely stopped flowing at a stream with about 15 miles to go. Fortunately, I had a Salomon XA filter flask as well, though it's much more difficult to fill another flask from that. With about 6 miles to go, I started to push us, and we ran gentler uphills, and let the exertion level creep up past all-day effort. Once we hit Old Marlborough Rd, I knew we could make it inside 11 hours, and kept the pace up. At the base of Monadnock, just like last year, the stream bed was dry. It isn't even a dashed line on the map, and given the snow, I expected to find water there. But just like last year, we had to trudge down the creek bed to the same pool of water to get a final flask for the summit push.

The whole way up, I tried to push Saúl with a strong power hike. As we hit tree line, some crampy twinges he had felt some miles earlier finally let loose, and we had to slow down. In spite of that, and the technical terrain and puddles, we made it to the summit just shy of an hour faster than Eli's FKT. There was no snow on the summit, but a cold wind blew, and we were immediately freezing. Remarkably, we had the summit to ourselves, but it was too cold to linger. We sheltered long enough to get on some clothes and a photo, then started our arduous descent. Achey legs and shivers took us down the horrible White Dot/White Cross trail toward our cars.
We finally warmed up well below tree line, and turned on headlamps. Thankfully, I remembered my car key.

Notes on multi-person unsupported efforts:
I think that multiple people running together carrying their own gear, but taking no aid should probably be a different category than unsupported solo efforts. I understand though, that the FKT community is already deep enough in complicated minutae of ethics that most eyes glaze over and few know the specifics. Accompanied Unsupported efforts are mentally far less challenging, though the dynamics of multiple people's pacing strategies, water strategies, fueling strategies, bathroom breaks, etc, may not lead to the ultimate fastest possible times. A perfect Solo Unsupported effort is likely to be faster than Accompanied Unsupported, but the margin for running fairly fast is much better Accompanied. This was not a perfect day for either of us, but we had a great time and pushed one another and ourselves. But either of us on a good day could have gone faster. Surely, someone will soon!