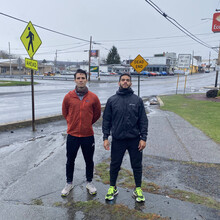 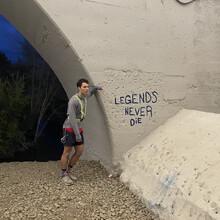 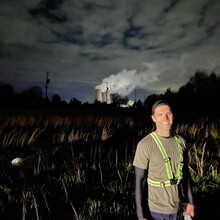 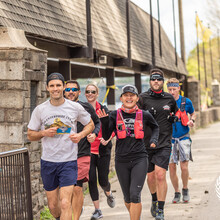 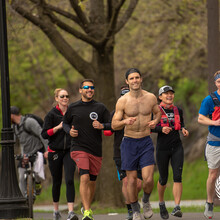 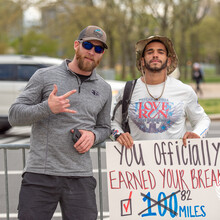 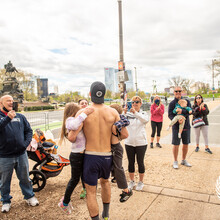 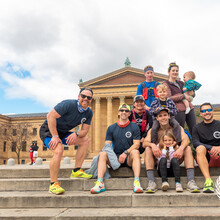 In November 2020, I attempted this route with my close friend Kellen Mathews. We both were drastically unprepared and lacked training to complete this endeavor. I had to stop at mile marker 75 for fear of serious injury and Kellen at Mile 88.

Kellen and I, along with others mentioned below are members of a Team called Earn Your Break (EYB). Our mission is that we are a community dedicated to raising money for charity by doing extreme fitness challenges. For this run, we partnered with Legacy of Hope in order to raise funds to help Philadelphia Area cancer patients. The money we raised ensures that no one who is fighting cancer goes hungry during the endeavor.

For more information on the cause or EYB please visit:

For this run, I was paced by close friends Kellen Matthews, Mike Doyle, Steve Stulb, and Ryan Fulmer. I was also joined by Rachel Heath, Chris Shimer, Sophorn Choup Duggan, Pete Walsh, and Shawn Pinney for the final stretch.

Ryan Bergin and Joe Staerk provided food, water, navigation, and much needed support. Ryan rode a bicycle for the entire route and Joe followed the team in a truck carrying supplies.

On April 16, 2021 in Frackville, PA, team EYB woke up to less than favorable weather conditions on the date we had scheduled to run the entire Schuylkill River Trail from point-to-point. 35 degrees and snowing sideways. The truck was loaded with food and water, the bike tires were inflated to their max PSI, and we were properly layered. As we arrived at the start at the intersection of Altamont Blvd and Rt-61, in the shadow of the "Dead End" sign, the we took off at precisely 0900 en route for Philadelphia, 109ish miles SE of their position.

The route began traversing through on the trails along Route 61, keeping the river in sight and navigating with a large paper map of the trail and the GPS map we had prepared beforehand. We focused on chewing up miles while the support team (both in the field and observing remotely) ensured that we were fed, hydrated, and on track. The Schuylkill River Trail (SRT) is not yet finished, so development of the route required some creativity from the team and some improvisation as we encountered bridges out, unforecasted construction, dead ends, and signs that led us off track. The route followed as closely to proposed trail as possible at all times, utilizing trails, roads, abandoned railroad tracks, and the occasional traipse through the wilderness.

Alongside myself, I had a peer runner who started the route with me but due to an oncoming injury, we were separated at about the 15 mile mark, making for two distinct narratives to the route. Kellen Matthews was coping with a languishing knee injury that he tried to address with some first aid, an IT brace, and OTC medicine. Displaying tremendous grit, he pushed through until mile 82 until he ultimately could no longer continue.

I continued to traverse the route slowly and methodically, making constant forward motion regardless of pace. I took all meals and hydration while moving. My singular focus and motivation was getting a hug from my children at the finish line, which I visualized each time negativity crept into my mind.

At approximately 1100 on April 17, 2021 I arrived at the Philadelphia Art Museum and realized my vision. Greeted by friends and family, I hugged my daughter and son and then proceeded to run up the stair set made famous by Sylvester Stallone in the original Rocky movie with my friends and family. To finish the final leg of the SRT in Philadelphia, my children and family joined me for the final 1-2 mile trail until the finish.

Many thanks to all the co-workers, family, and friends who supported me completing this route. I would have not been successful without you!

Thanks to Gene Dykes, Jess Grinspan, and Atlee Burpee for the guidance and map to study. Thanks to Michael Gagliardi for the encouragement and coaching. Thanks to my wife, Mary, for convincing me that I could do it and supporting me during the many hours of training that lead up to this.
To anyone that wants to attempt this route, contact me via email (EarnYourBreak@gmail.com) and I’ll tell you everything I did well and everything I’d do differently. I’d love to meet you for the start or finish as well. Looking forward to joining people using this amazing trail.

Congrats, heck of an effort!