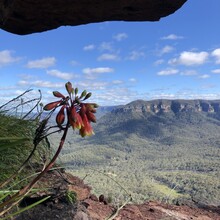 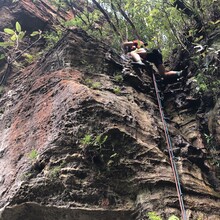 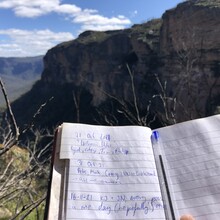 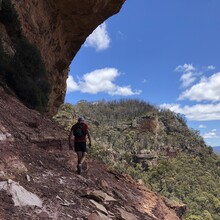 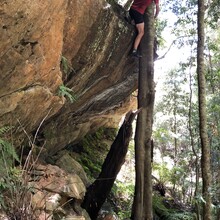 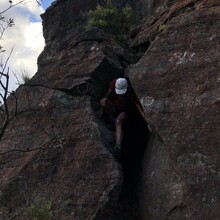 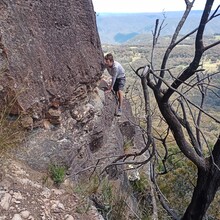 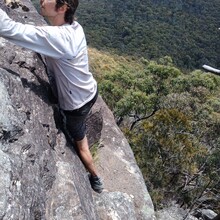 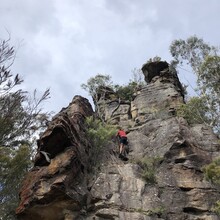 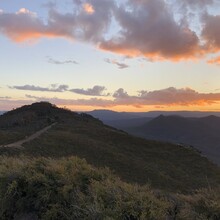 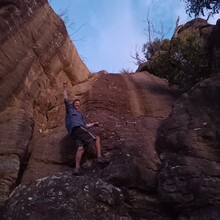 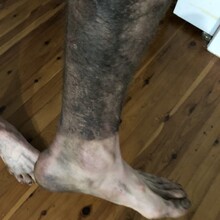 I began hearing whispers about legendary passes through the Narrow Neck cliff line. Abandoned ladders, chains and spikes, placed by cavalier bushwalkers and miners about a century ago. Thin crumbly ledges half way up enormous cliffs. Aboriginal pathways used for millenia - now missing the notched tree trunks carefully stacked to aid climbs. I was terrified and attracted. In July this year I finally had enough experience to begin exploring the harder passes one by one, leaving the scariest for last.

Was it even possible to link every pass in one push? So much concentration, such high stakes, for so long. I couldn't bear to look the project in the eye. Having amazing adventures just happened to be the perfect preparation. Mt Hay to Mt Banks via Zobel Gully with Brian. An eight hour link-up of passes from Diamond Head to Wentworth Falls with Jared, Keith and Brendan. Keith and I linked seven passes of Mt Solitary in one day. We recreated Rodney Nelson's Terreo Pass, and improvised through pagodas and slots to reach the Grand Balcony and then descend into the Minotaur's Lair. Ready!

Narrow Neck in a day
Our priorities were not to die and to finish (in that order). That decided our strategy: wait for the right weather, have a flexible plan, bank energy for high consequence passes, bail if experiencing fatigue.

Thanks John or including me in your excellent project. Most bushwalkers set out to do one or sometimes two of the Narrowneck Passes as a daywalk... Johns' idea was to complete all fourteen known bush-walking passes consecutively.... in a single day if possible.

Our route plan was to pair up passes so we could descend one, traverse along the talus or a ledge and then ascend the next. But some of the more remote ones had no convenient pair, so the only option was to bounce down and back up to the plateau. We ended up doing six of them twice for a total of twenty passes. Landslide Gully is arguably not on Narrowneck, but our view is that the access point is on GlenRaphael Drive so we included it, particularly as it was easy to pair with the Golden Stairs.

The other criteria was to complete the trickier ones while we were still fresh, that meant not finishing with Landslide, Dixons, Diamond Head, Walls, Black Billy Head, Coachwood or Carlon Head was a priority. The route we selected was to start in the North and work our way towards the four easier ones in the South, in the hope that we could complete the tricky ones before dark while we still had some coordination remaining.

After completing the day, I'd make two or three significant changes to our route resulting in a similar distance with more vert but with less bushbashing, resulting in a more pleasant trip and maybe even a faster time.

In total I logged 4500m of ascent over 53km, nearly 20km of firetrail and 35km of offtrack walking and scrub bashing. We had planned to take advantage of a good weather window and started at daybreak enduring a chilly 6C jog to the first pass. It soon warmed up to a pleasant 18C with a light breeze and only a few clouds throughout the day.

We both carried tape or handlines for some of the trickier scrambles, but mostly relied on the existing chains. However, some had been destroyed by the 2019 fires so be prepared. As John alluded, some of the passes might be a little beyond the comfort zone of some so a harness may be preferable.

We planned to get the hardest and most dangerous passes finished before dusk, and after the first six we were on track. A minor nav detour that cost us a few minutes near Coachwood Pass was followed by the awkward tree descent to the creek and re-ascent. Then we traversed the half way terrace for three kilometers past two exposed and loose narrow sections to bounce down and back up Black Billy Head.

By the ninth Walls Pass a vertical 9m descent, I was starting to fade, and on the descent of Carlon Chains a small misstep close to the top reminded me to slow down and concentrate. The next two were easy enough, connected by some spectacular halfway ledges offering panoramas to the Wild Dog Mountains in the West and then Kanangra in the South.

With only the final two easy passes remaining - Wallaby Track & Tarros Ladders - the sun was reflecting off the bottom of the scattered clouds. Jogging to the southernmost tip of the plateau we completed the final two within twenty minutes before the wind started to become chilly for the 10km shuffle back to the car under the full moon.

I'd strongly suggest that anyone attempting this should be familiar with every one of the passes beforehand - we had both done them all previously. There are good tracks to the well used passes, only rough pads or scattered cairns to a few, but some are completely unmarked. A GPX trace will only be accurate to ten meters or so - that's often not enough to locate the exact ledge or cliff where the safest (or only) descent route lies, particularly as GPS is unreliable close to the cliff faces.

Johns photos show how exposed some of the passes are. The ledges we traversed are 100m above the valley, some narrow with only loose, sloping and eroded gravel underfoot. There is significant exposure in at least a dozen sections. Wet or windy weather would increase the degree of difficulty - pick a good day.

The Mountains had rain a couple of days prior, this provided us with water at a few drips and soaks along the way. However, you need a solid plan for water - there are very few reliable sources on the Southern half of Narrowneck, and none at all anywhere on the fire trail.

The Passes Of Narrow Neck is a significant undertaking that definitely needs thorough preparation and familiarity with the route and terrain, as well as a good head for heights & strong scrambling ability. There are spectacular views throughout and impressive ledges to traverse. By the end expect to be covered in charcoal, battered and scratched by the scrub and to have had an unparalleled adventure in the wilderness of the Blue Mountains.